With the heavy restrictions on Apple’s App Store these days – particularly in respect of any type of file-sharing software – the chances of downloading a BitTorrent client are slim to non-existent.

Of course, users of jailbroken iPhones and iPads aren’t restricted to just one location to obtain software for their devices. Cydia, the alternative independent software store, has far fewer restrictions than Apple and for file-sharing fans that can only be good news.

According to a new report, the stalled development of the iTransmission BitTorrent client has now been given a kickstart by a dev known as iOSHomebrew. The tweak has reportedly undergone significant updates, is compatible with iOS 5.x, and is available for download from Cydia now.

“After installation, iTransmission 2 comes with a decent set of configurable options offering a lot of the functionality that you would see from a desktop client of a similar nature,” Redmond Pie reports. 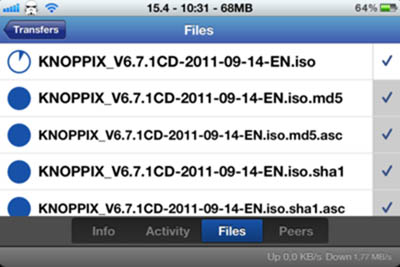 “The ability to toggle a web interface on or off as well as being able to set the app up to download over Wi-Fi network, cellular data connection or both if required, which is obviously a feature to save high data costs.

“Users have the option to add downloads through a number of different methods meaning the tweak is extremely versatile and comes all packed into a very native, but attractive and simple to use user interface,” RP concludes.

iTransmission 2 is available from Cydia now and it costs absolutely nothing.