Jailed Copyright Troll Partner Claims to Be Fundraiser For PIPCU 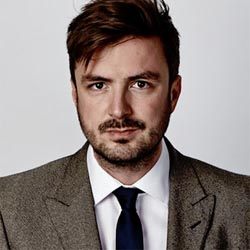 In 2015, German-based monitoring company Maverick Eye said that it had teamed up with Robert Croucher of London-based Hatton & Berkeley to target file-sharers with cash settlement demands.

Hatton and Berkeley’s letters to ISP subscribers contained threats that non-payers would end up losing a copyright infringement lawsuit. While that has still yet to happen, Robert Croucher has had legal trouble of his own.

Following a September trial, Croucher was jailed for five months after pleading guilty to attacking an Uber driver in London.

“Mr Croucher was immediately placed in custody and taken to Wormwood Scrubs where he was placed on the high risk ‘D Wing’, a section of the prison infamous for housing a mixture of extremely violent criminals and mental health cases,” a new Hatton & Berkeley (H&B) statement to TorrentFreak reads.

“His cell was a white room with bars open to the elements. And as he entered he was faced with walls smeared with the feces of the previous occupant, a single inch-thick stained mattress and a filthy toilet. The conditions were appalling.”

However, Croucher wasn’t in there for long. After 16 days in custody, he says he was granted a quick appeal. According to H&B, CCTV footage taken outside the club now apparently showed Croucher “walking away from an argument and being chased by the Uber driver, Mr Hussain.”

“In court, Mr Hussain had previously demanded compensation for his inability to work due to the severity of his injuries. Later, with no evidence to support such claim, his story along with that of the witnesses — two doormen of the nightclub Raffles — changed drastically to the claims of a sustained attack as above,” H&B claim.

Indeed, during a now-deleted Twitter exchange at the weekend with anti-troll activists, Robert Croucher described the Raffles workers as criminals. 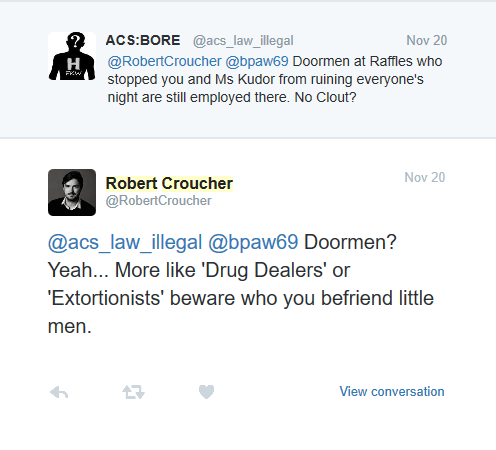 In the statement obtained by TF, H&B claim that Croucher was “given medical attention for severe chest pain” after being attacked by the doormen.

“It later transpired that the two witnesses, the doormen of Raffles nightclub, had broken two of Mr Croucher’s ribs and sprained his wrist earlier in the evening,” the company said.

While neither doorman was arrested or charged, Croucher’s company says that his life was turned upside down by the events of that night, despite the court taking the decision at his appeal to release him 16 days into his sentence.

“Business partners and clients turned away from him due to concerns over his reputation. Meanwhile, years of his work on copyright protection and law enforcement financing was significantly undermined,” the company said.

TorrentFreak asked Hatton & Berkeley how its work was undermined. We were also intrigued to hear of Mr Croucher’s apparent financing of law enforcement. According to Croucher, he is now working “on a private funding initiative for the City of London Police Intellectual Property Crime Unit.”

This unusual statement raises questions on a number of fronts. After being convicted of assault after a guilty plea, Croucher has a criminal record, even after a shortened sentence. Certainly, H&B’s statement gives no indication he was cleared of the assault. We asked them directly but received no response.

“Mr Croucher’s conviction was overturned. He did plead guilty to slapping Mr Hussain, who is currently being investigated for the assault raised in Court on the 7th of October. It may be of benefit at this point to reference that Mr Croucher is seeking guidance on prosecution of both the Uber Driver and the Doormen. He has no criminal convictions and as the court had stated ‘a man of good character’.”

TorrentFreak shared the full H&B statement with the Police Intellectual Property Crime Unit and asked for details of their relationship with Mr Croucher. Are they working with him on anti-piracy enforcement in the UK? At the time of writing, PIPCU have provided no response.

While Croucher implies that he’s cozying up with the UK’s most elite anti-piracy unit, he has no kind words for a certain lawmaker. During a Lords Grand Committee hearing in June, Lord Lucas referred to Croucher’s anti-piracy activities in rather negative terms.

“The current scammers aren’t pursuing anyone [in court] they’re just after threats, and extortion, and shaking people down,” Lucas said.

Dramatically, Croucher says that Lucas’ comments are partly to blame for his treatment in court during the assault trial.

“Under parliamentary privilege, [Lord Lucas] is able to [make comments] without threat of civil recourse. In Mr Croucher’s opinion, it is these remarks that contributed to his treatment in court on the 22nd of September,” H&B state.

According to his company, Croucher’s enemies can’t only be found in Parliament. H&B says that for the past year, Croucher’s life “had been akin to a witch hunt”, launched against him by “bloggers, the BBC and Lord Lucas.”

Nevertheless, he seems undeterred and will continue his quest to end Internet piracy.

“I’d like to continue concentrating on building a better future for those in the creative industries I support. My goal is to see digital piracy stamped out worldwide, piece by piece,” he says.

This statement by Croucher raises more questions than it answers. When both the Police Intellectual Property Crime Unit and Croucher respond, we’ll be certain to update this article detailing the nature of their relationship.