As one of the largest online file-sharing services, 4shared is closely watched by copyright holders whose work is made available on the site.

The site itself has a DMCA takedown procedure in place so rightsholders can remove files directly, but interestingly, most complaints about the site are directed at Google’s search index.

Over the past several years the search engine has received a mind-boggling 50 million takedown requests for 4shared URLs, more than any other website out there.

An unusually high amount, especially considering that 4shared only has about 2 million pages indexed.

TorrentFreak had a chance to speak with 4shared, which isn’t proud of this record. However, the company believes that the numbers are massively inflated due to various dubious takedown practices.

One of the issues that was brought up first, is the question why rightsholders would target Google at all if they can remove infringing files directly from the site itself.

According to 4shared, the top reporting agencies know very well that 4shared has a strict removal policy. In fact, some even have direct delete access, allowing them to remove files from the site straight away.

“Complaining to Google is not effective if your goal is to remove a file asap,” 4shared’s Mike tells us. “It only removes the link from search results in Google, while sending a complaint directly means a quick block of the link itself.”

According to 4shared, the high number of takedown requests is in part driven by bogus reports. The company used the Lumen Database to review several takedown notices and quickly realized that many reported links are pointing to the same files, or none at all.

“What we can see is that numerous complaints provide a redundant volume of links that look like some machine-built template as well as a large amount of non-informative links to various parts of the 4shared website,” Mike says.

“The organization APDIF do Brasil, which is the top reporter, submits absolutely meaningless complaints where obviously a bot cycles some keyword through all possible variations of search requests without leading to any specific file which may be copyright-protected.”

One of the examples 4shared mentions (among many) is this link, which simply points to a 4shared search for the keyword “video.”

APDIF do Brasil alone is responsible for 35 million of the reported 4shared links Google received, so their submissions weigh heavily on the total number.

“In other words, 70% of delisting requests were sent by this organization and apparently numerous requests, if not all, contain meaningless links artificially increasing the volume of complaints in terms of links included,” Mike notes.

These automated claims are not new of course. At TorrentFreak we also repeatedly report on similar examples, where non-existent files or dead sites are targeted by copyright claims.

4shared says that broad or inflated request are rather common, highlighting several other reporting agencies such as Digimarc and Muso. The latter repeatedly targets links that ultimately point to the same file, such as in this notice. 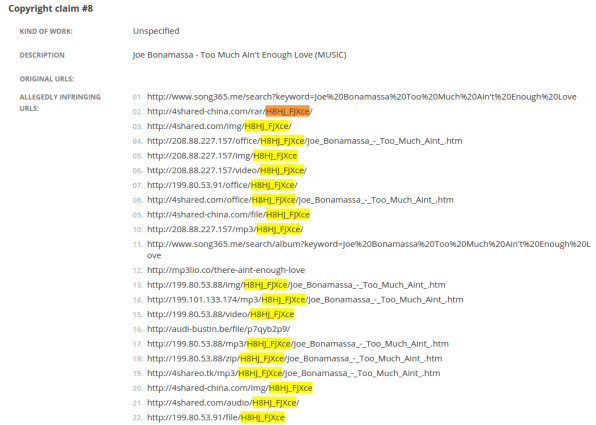 “It includes numerous links to exactly the same 4shared’s page in one claim (#8). These are the same page because each page (file) has its unique ID. And in this example it is H8HJ_FJXce. Yes, links look different but this is the same page with parameter variations,” Mike says.

4shared believes that this is the result of automated takedown templates. Not least because files can only be in one category, not in multiple ones, as is the case here.

Perhaps just as strange, Muso has access to a direct removal account on 4shared, so in theory there shouldn’t be any reason to target Google. After all, they can easily remove the source file directly.

However, Muso informs TorrentFreak that they prefer to do both. The 4shared files that are reported to Google are also removed directly. According to the company, they do this to prevent people from finding other infringing content on the site.

Whether that’s what the DMCA reporting system is intended for is doubtful.

All in all, 4shared believes that some copyright holders abuse Google’s system. The 50 million record should, therefore, be taken with a grain of salt, or a spoonful.

Instead of bombarding Google with dubious requests, 4shared encourages rightsholders to reach out to them directly.