Founded half a decade ago, Swefilmer grew to become Sweden’s most popular movie and TV show streaming site. Together with Dreamfilm, another site operating in the same niche, Swefilmer is said to have accounted for 25% of all web TV viewing in Sweden.

In the summer of 2015, local man Ola Johansson revealed that he’d been raided by the police under suspicion of being involved in running the site. In March 2015, a Turkish national was arrested in Germany on a secret European arrest warrant. The now 26-year-old was accused of receiving donations from users and setting up Swefilmer’s deals with advertisers.

In a subsequent indictment filed at the Varberg District Court, the men were accused of copyright infringement offenses relating to the unlawful distribution of more than 1,400 movies. However, just hours after the trial got underway last June, it was suspended, when a lawyer for one of the men asked to wait for an important EU copyright case to run its course.

That case, between Dutch blog GeenStijl.nl and Playboy, had seen a Dutch court ask the EU Court of Justice to rule whether unauthorized links to copyrighted content could be seen as a ‘communication to the public’ under Article 3(1) of the Copyright Directive, and whether those links facilitated copyright infringement.

Last September, the European Court of Justice ruled that it is usually acceptable to link to copyrighted content without permission when people are not aware content is infringing and when they do so on a non-profit basis. In commercial cases, the rules are much more strict. 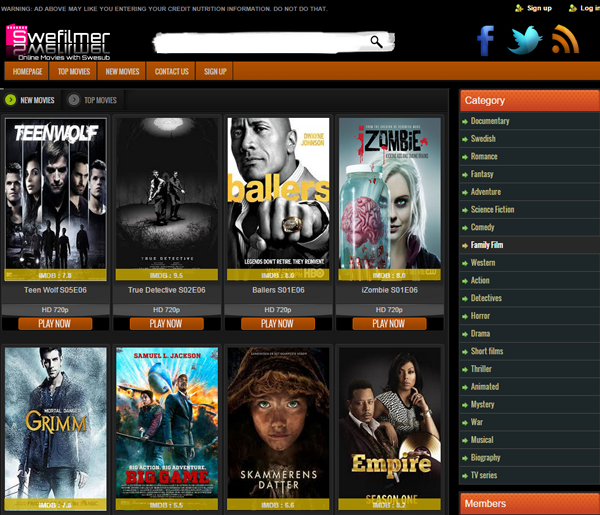 In light of that ruling, the pair return to the Varberg District Court today, accused of making more than $1.5m from their activities between November 2013 and June 2015.

While Swedish prosecutions against sites such as The Pirate Bay have made global headlines, the case against Swefilmer is the first of its kind against a stream-links portal. Prosecutor Anna Ginner and Rights Alliance lawyer Henrik Pontén believe they have the evidence needed to take down the pair.

“Swefilmer is a typical example of how a piracy operation looks today: fully commercial, well organized and great efforts expended to conceal itself. This applies particularly to the principal of the site,” Pontén told IDG.

According to Ginner, the pair ran an extensive operation and generated revenues from a number of advertising companies. They did not act alone but the duo were the ones that were identified by, among other things, their IP addresses.

The 26-year-old, who was arrested in Germany, was allegedly the money man who dealt with the advertisers. In addition to copyright infringement offenses, he stands accused of money laundering.

According to IDG, he will plead not guilty. His lawyer gave no hints why but suggested the reasons will become evident during the trial.

The younger man, who previously self-identified as Ola Johansson, is accused of being the day-to-day operator of the site, which included uploading movies to other sites where Swefilmer linked. He is said to have received a modest sum for his work, around $3,800.

“I think what’s interesting for the Swedish court is that this case has such clear elements of organized crime compared to what we have seen before,” Anna Ginner concludes.

Update: A source close to the case has informed TorrentFreak that the case against the alleged Swefilmer operators has been postponed and will now go ahead in three to six weeks. We are trying to get more details.