It looks like American rapper Lil’ Kim was caught red-handed stealing the work of a Canadian makeup artist.

Samantha Ravndahl, who is both the model and the artist in these series of pictures, recently found out that Lil’ Kim is using her work as the album art for a recent track.

“Lil Kim took my photo and is using it as album art (might I add she took the liberty of adding her watermark over it on instagram),” Ravndahl writes or Reddit.

The makeup artist took her complaint to Kim’s manager and team but thus far without much luck.

“I have spoken with a lady on her team as well as her manager, which has done a whole lot of nothing. I’ve reported the photos on Facebook and Instagram multiple times, but they are continually posted.” 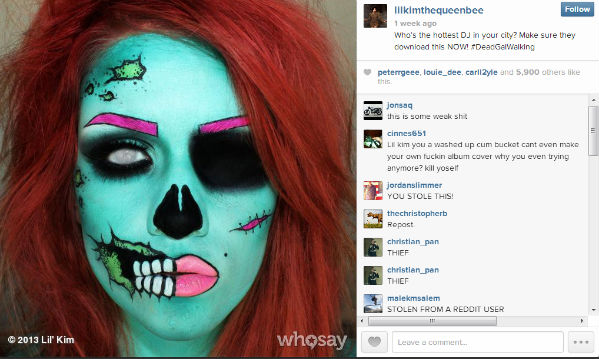 Ravndahl collected advise from hundreds of commenters on Reddit and is still considering what steps to take next, which may include legal action.

It’s worth mentioning that uploaded the images to Imgur and shared it on Reddit last month, suggesting that she doesn’t mind when people download and share copies. Also, technically Imgur’s TOS allows the site to sub-license images to third parties, although there’s no indication that this happened here.

In any case, it would have been nice if the original artists was credited. We doubt that Lil’ Kim will appreciate it if another artist copies here tracks while stamping their own name on it.