Here’s an analysis of the popularity/market-share of the various TV release groups. The sample data was taken from all the eztv releases since June 5, 2005 up to today March 6, 2006. This totals 1728 releases. Below is a pie graph showing the market share of the 15 most popular release groups. 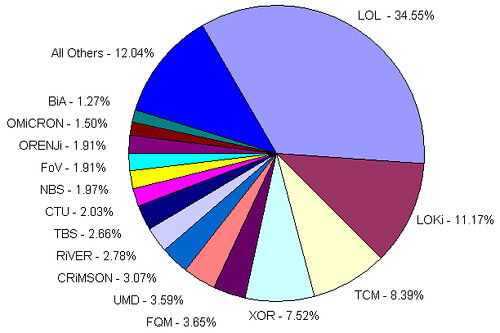 A few interesting observations emerge from this study. Firstly, we see that the fabulous guys from the top 3 release groups provide just over 54% of all the TV programmes available through eztv. We can also observe the incredibly large number of release groups serving the TV Scene. This hopefully means that if, despairingly, one or more of them get taken down, there will still be enough to carry the weight.

Please note that this analysis just focused on the release of TV shows after they aired on American (and sometimes British) TV. It does not take into account the release of DVD rips of TV shows. Nor does it take into account the releases from VTV or the now discontinued CTV. However, since eztv has the most releases, and most shows that are carried by VTV and CTV have already been released by eztv, I felt that they were adequate for this analysis.

Furthermore, sometimes LOL releases its shows under the name of “TV”, as in “Everybody.Hates.Chris.S01E04.HDTV.XviD-TV.” I have thus counted “TV” releases as LOL releases.

In closing I think we should just be incredibly grateful to these guys for risking their butts to provide us with these shows. After all, its not there fault that the American TV Channels have missed an incredible financial opportunity and created a tremendous market failure as a result. There is still hope, however.