For the past several years the publication of a so-called ‘Transparency Report’ has become common on large technology focused sites. Reddit, Twitter and even Amazon produce such documents.

Perhaps the best known report is produced by Google. This giant database is updated on a daily basis and includes details of hundreds of millions of requests by third parties to have content removed from the search giant’s databases. Today, cloud-storage site Mega gets in on the act with the publication of its first transparency report since the company launched in 2012.

The report, which details activities up until March 2015, focuses on content removal requests and third-party requests for information related to Mega’s users.

Noting that the company is New Zealand-based and is governed by the laws of that country, Mega notes that it also aims to comply with regulatory requirements in other key areas in which it does business, notably the United States.

“When Mega receives such notices it promptly removes or disables access to the offending file or files, depending on the type of request, consistent with the Terms of Service agreed to by every registered user,” Mega notes.

These options allow for externally linked content to be taken down while respecting fair use, for example.

“Many copyrighted materials provide the user with a licence to make a backup copy. Recently enacted UK law confirms this right. Uploading it to a cloud storage service is not infringing,” Mega explains.

Overall, the numbers of files being taken down are small when compared to the total number of files stored on the service.

“The number of files which have been subject to such take down notices continues to be very small, indicative of a user base which appreciates the speed and flexibility of Mega’s system for fully legal business and personal use.”

Mega’s claims of a “very small” number of files being taken down is supported by the company’s data. Currently the company’s users upload an impressive 15 to 20 million files per day, or more than 200 files every second.

Also noteworthy is the total number of requests Mega received for the removal of content. Starting in 2013 Q1, the company received 51,857 requests but 21,779 (42%) were either duplicate or invalid. By 2015 Q1 things had improved somewhat with ‘just’ 21% of requests rejected. However, 2014 Q4 was a particularly bad month, with more than a quarter of a million (63% of all notices sent) rejected due to being invalid or duplicate. 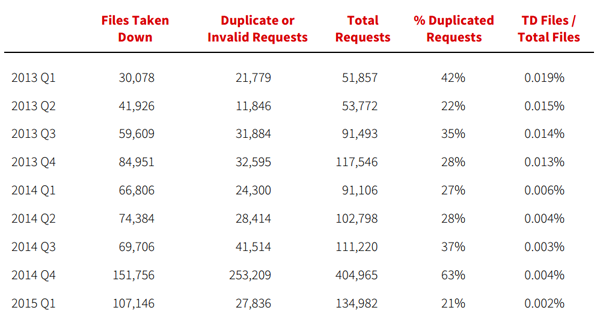 Despite the large numbers of complaints received (valid or otherwise), Mega says that it deals with them all in a timely manner.

“The DMCA requires links to be taken down expeditiously. Most cloud providers target takedown within 24 hours. Mega targets takedown within a maximum of 4 hours, with takedowns frequently being actioned much quicker than the 4 hour target,” the report reads.

This timing is impressive. In a 2014 announcement, Google reported an average takedown time of six hours when the company took down 222 million results from Google Search in 2013.

With entertainment companies continuously breathing down the company’s neck, the way Mega deals with so-called ‘repeat infringers’ is an important public barometer of the company’s attitude towards protecting copyright.

“Mega maintains market leading processes for dealing with users who upload and share copyright infringing material or breach any other legal requirements,” the company notes.

“Mega suspends the account of any user with 5 takedown actions. In some cases the account can be reinstated where it is proved to be the subject of invalid takedown notices but most suspended accounts are terminated. Up to 31 March 2015, Mega had suspended 29,213 users.” 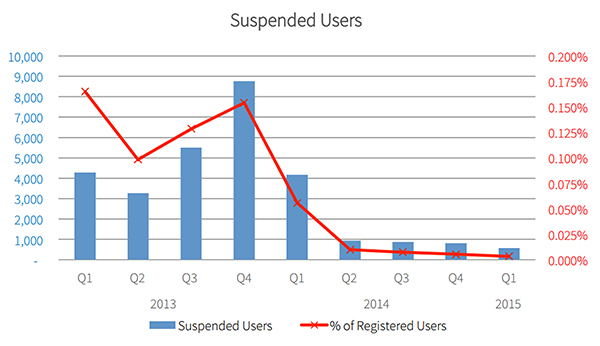 Mega bills itself as ‘The Privacy Company’ so users are likely to expect that their personal information will be as safe, if not safer, in the hands of Mega than similarly placed service providers. Mega says it values user privacy but in some cases the company will hand over information to relevant authorities when required.

“Privacy is not an absolute right and is subject to limitations. We take all requests for the disclosure of user information seriously. In considering any request for user data, user information or action involving a Mega user, Mega starts from the position that user data and information is private,” the company writes.

However, considering how many people use Mega’s services, requests for personal information are extremely low.

In 2013 the company received just a single request but handed over no data. In 2014 a total of six requests were received (all from overseas) and just two resulted in information being disclosed. Of that total, four requests were made by government or the police, two from corporate entities and one from a private individual.

“Mega respects the need to openly disclose the level of non-compliant activity of the few users who breach its Terms of Service, even though many competitors don’t disclose such information,” Mega CEO Graham Gaylard informs TorrentFreak.

“Mega works very hard to ensure that the legitimate rights of content owners are respected.”

The full report can be found here.

Twitter Copyright Notices Have Doubled in Half a Year

Reddit Copyright Complaints Jump 138% But Almost Half Get Rejected