Reddit is without doubt one of the most popular sites on the Internet. The community-driven behemoth is the world’s 28th most popular site according to Alexa, rising to 9th most trafficked in the United States.

Aside from posting the latest breaking news, AMAs, plus a million items in between, it will come as no surprise that in 2014 some of Reddit’s users also infringed copyright. Details of subsequent complaints have previously remained private but thanks to the publication of Reddit’s very first transparency report, we now have more of an insight.

While the company has some fascinating thoughts on copyright (which we’ll come to in a moment) it’s notable how few takedown requests Reddit receives. 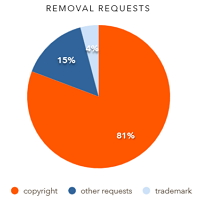 In 2014 the site received just 218 requests to remove content, 81% of which were DMCA-style copyright notices.

Interestingly and unlike those who send the notices, Reddit reveals that “real humans” examine each and every request received. It’s clear that in many cases they don’t like what they see.

As previously reported here on TF, on many occasions copyright holders have approached Google in an attempt to have entire Reddit communities removed from its indexes. The search engine mostly rejects those requests and Reddit isn’t impressed by them either.

“We received many copyright takedown requests for entire subreddits. We (and the DMCA) require specific identification of allegedly infringing content, not broad demands to delete entire reddit communities,” the company reveals.

Reddit doesn’t host any content of its own but instead users can post links to material hosted elsewhere, which they do in their millions every day. However, when those links point to infringing content such as movies, music or TV shows, copyright holders tend to see that as facilitation of infringement. Nevertheless, Reddit has its own opinions on what breaches the law.

“A significant percentage of the copyright takedown requests we received were for user-submitted URLs that link to content hosted on other websites. Because links do not generally infringe copyright, we exercise extra scrutiny in assessing takedowns for links,” the company says.

Of course, Google might argue the same point but instead it removes millions of links to content every single week.

Under the DMCA a copyright holder can request content to be removed from a third-party website via the sending of a properly formatted DMCA notice. Such notices must include:

According to Reddit, many notice senders fail to make the grade.

“We rejected many copyright takedown requests because they did not include the information required by the Digital Millennium Copyright Act (DMCA),” the company reports.

Overall and despite its millions of users, it appears that Reddit does not have a significant copyright infringement problem, despite the fact that several sub-reddits are dedicated to linking to infringing content. For now most copyright holders are ignoring the site, while others prefer to complain to Google instead.