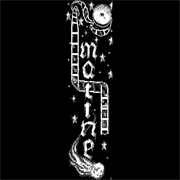 Topsites are top-secret, high-speed servers used by piracy release groups and their affiliates for the storage and distribution of unauthorized copyrighted content. Together, these silicon-powered caches and their carbon-based operators form an entity known as The Scene.

Members of this tight-knit but sprawling network are known for their vigilance, and for good reason too. As the source of tens hundreds of thousands of ‘pirate’ releases every year, law enforcement has a keen interest in bringing them down. But for many the rewards of Scene life are well worth the risks. Twenty years ago, SaInT began taking lots of them.

“I started camming in the early 90s for a group called HBO (the founder of which ran a New York bootleg ring) and that’s when I learned the craft and understanding of a camcorder and its technology,” SaInT informs TorrentFreak.

SaInT received his first camera (a Sony) from a topsite affiliate but quality was lacking. Soon he upgraded to what he describes as “professional grade” Panasonic kit and after doing work for infamous release group Centropy, SaInT moved on to form another famous operation.

“At that point we knew we had it. I gathered one more person to the crew that I trusted, we will just call him Mr P for now. He helped find a few topsites and someone who could program and run our own sites and BNCs. Here, ‘MaTinE’ was born.”

Until its demise just a couple of years ago, MaTinE was a big name. A cursory flip through most torrent sites reveals releases as current as 2013, but the group dates back to at least 2003 with the Internet debut of titles including Spy Kids 3D plus screener copies of Matrix Revolutions and a director’s cut of Alien. 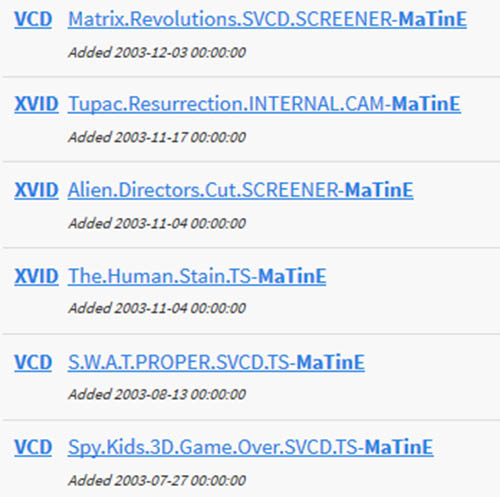 “We always recorded during matinee sessions after the early days as it was the safest rime to record. We didn’t just record here or there – every cameraman was taught how to choose theaters to record in and knew how to rotate to avoid the MPAA and the feds,” SaInT says.

“I was the first cameraman. When I mean cameraman I mean we didn’t use Asian silvers [pressed, pirate DVDs] off the street or crap recordings for our sources. We used our own high quality recordings with direct audio most of the time.”

MaTinE’s ‘direct audio’ was often sourced from DTS discs, a huge improvement over microphoned and audience-polluted ‘cam’ soundtracks. But while DTS discs could be accessed for a while, those dried up too.

“Back in the day there was a tool to rip audio from the DTS discs used in theaters. Then all you had to do was sync the audio with the video. It wasn’t until later when DTS2 came out that everything was crushed for a while. Then people started recording audio from drive-in theaters as they broadcast that over private radio stations,” SaInT explains.

Soon MaTinE was establishing new suppliers and gaining access to coveted screeners, workprints and top-grade hardware. As it reached maturity a total of seven people were in the group. Each member had a precise job and each was dedicated to doing it well, SaInT included.

“For example, to get the best quality of a movie for a bright clear picture your lux levels on the camera needed to be right. To stop the flicker, i’d adjust the shutter speed one notch. To position a camera for a perfect image, i’d sit in the center back row with a large coke and no straw of course. Then sit the cam on the coke and adjust before the movie started.”

But while for MaTinE maintaining quality meant the rejection of foreign street-level sources, other Scene groups were still involved with piracy groups in the Far East. In fact, those Far East piracy groups needed video sources too and were prepared to enter mutual back-scratching arrangements with the Scene to get them.

“Most groups had ties to Malaysia, Singapore, and Indonesia. They were your main source for the funding of projects or supply of equipment in return for allowing them to have your release early,” SaInT explains. The image below shows a 2004 appeal from MaTinE for the donation of camming equipment.

SaInT says that at one point he was offered $3,000 each for the supply of movies on the day of their release but his only interest was to pursue the art of achieving the best possible quality. Inevitably, however, the lure of cash was too much for some, with tragic consequences.

Like those featuring MaTinE, Centropy and maVen, during the 2000s a VideoCD tag on an Internet movie release was a sign of quality. However, not all was well behind the scenes.

While SaInT concedes he was “cool” with a founding member of VideoCD, members of that group had been sending video to the Far East in return for cash, something generally frowned upon in the Scene. But worse still and without SaInT’s knowledge, other MaTinE members had also been selling the group’s content to VideoCD affiliates overseas. That was only discovered when a member of VideoCD was busted.

“The VideoCD arrest happened and we found ourselves in a problematic position. We didn’t know some of our members had been selling our releases off raw [large files, before compression] to VideoCD’s contact in Singapore,” he explains. 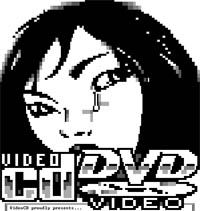 “Briefly we shut down shop and me and the lead two others regrouped and corrected our issues. We had rules and selling our releases was one thing we didn’t allow, especially raw copies. We just wanted to be the fastest and most dominant release group of early releases.”

While MaTinE survived, there were casualties. SaInT recalls VideoCD members being arrested and given hefty sentences. Their seized computers led the authorities to more people which in turn led to more sites.

“It’s obvious that VideoCD had allowed the feds in doors they could never enter before,” he notes.

MaTinE carried on until 2010, but then tragedy hit when one of their cammers was arrested for an unrelated but serious offense.

“His arrest wasn’t for recording but much worse. So, in fear of him using us as a bargaining chip, we dismantled and wiped his computer. After a period of time away we returned to hammer away again until the final blow in 2013.”

The beginning of the end

After a few years away from the Scene, MaTinE returned to an Internet even more flooded with torrents and a climate in which every one of their releases found itself recoded and passed off as someone else’s work.

“No group back in the day could do that, in the Scene there were rules. So in our NFOs we denounced many groups because of this. We knew no one could compete,” SaInT says.

Then after a decade of excitement, pride, close shaves and then disappointment, two years ago SaInT himself ran into trouble. In a theater that shall remain nameless and with camera in hand, SaInT took his place for the umpteenth time to do what he did best. Then suddenly, during the screening, the police rushed him.

“I know what led them there. During the recording there was only one set of people. A lady stood up. Turning towards the doors at the back of theater, she spotted a glare off the camera lens. She alerted the lady up front who called the detectives,” he reveals.

It soon became evident that the police had been watching SaInT and another member for a couple of years, but up until that fateful day had drawn a blank due to the pair’s caution. Now they had what they needed to prosecute.

“I was charged on a count of recording a film under license without consent. All my property was confiscated and used to try and prove what movies I had recorded with that camera because each camera digital signatures each image uniquely,” he reveals.

“The studios tied a few movies in which [security] dots where missed or not taken out. I was handed down a small sentence without jail because my lawyer was able to show that they couldn’t prove directly that I recorded the movies.” 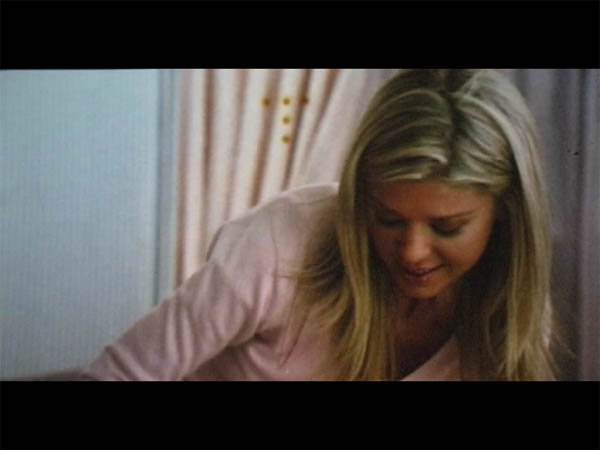 After his arrest, SaInT says that big decisions had to be made. He’s vague as to what happened to MaTinE but hints that even today people are benefiting from the group. That being said, his personal involvement is over.

“I am keeping a good distance. I must for the sake of my freedom and my kids. I had a long run. 20 years is a long run. I can’t say that I will never do it again and won’t return to the Scene. But as of right now SaInT is retired and family driven.”

While SaInT might be out of the game he says that others trying to fill the gap should look back, not forward.

“No good low light cameras have been made in the past four years. Most are now focused on HD and Ultra 4k tech. Canon and Panasonic made the last good cams. Nothing under $1500 though,” he notes.

“To get Centropy and MaTinE quality you will need about $3500 or more. I won’t say which one but Canon released an HD camcorder that transfers movies via Bluetooth to a computer and has the best low light tech ever. It’s so good you can be in a pitch black room and see everything just fine with great picture quality. I have one in a closet right now with about $4k worth of accessories.”

“I will always love early true copies of movies. I’ve seen the rise and fall of many great people in this race. I am proud I defined standards for the Scene and was a key player in doing so. I feel like a grandfather of the Scene honestly,” SaInT says.

“I have no respect for groups who can’t provide their own sources. In reality they’re not even groups, just lame thieves. I wish more groups would inspire themselves for the better, rather than faking it.”

I Was a Member of Centropy, The World’s Leading Movie Piracy Group