MPAA Revenue Up 50% As “War on Piracy” Cranks Up

Protecting the interests of Hollywood, the MPAA has been heavily involved in numerous anti-piracy efforts around the world in recent years.

From the pro-SOPA lobby in the United States through the iiNet case in Australia and the Megaupload shutdown, the MPAA has worked hard to target piracy around the globe. Perhaps related to these increased anti-piracy efforts, the six major movie studios backing the MPAA nearly increased their investment in the group by 50% over a two year period.

This conclusion comes from the latest tax filing submitted to the IRS by the MPAA a week ago, covering the fiscal year ending December 31st 2012. The paperwork reveals that the movie studios increased their membership dues from $41.5 million in 2010 to $59.7 million two years later.

Total revenue increased from $48.6 million to $66.8 million in the same period. Interestingly and despite the sizable increase in funds, the MPAA cut nearly 20% of its employees to 200 in 2012, down from 247 two years earlier.

The latest tax papers picked up by Variety reveal that MPAA boss and former senator Chris Dodd is handsomely compensated with an income of $3.3 million a year. 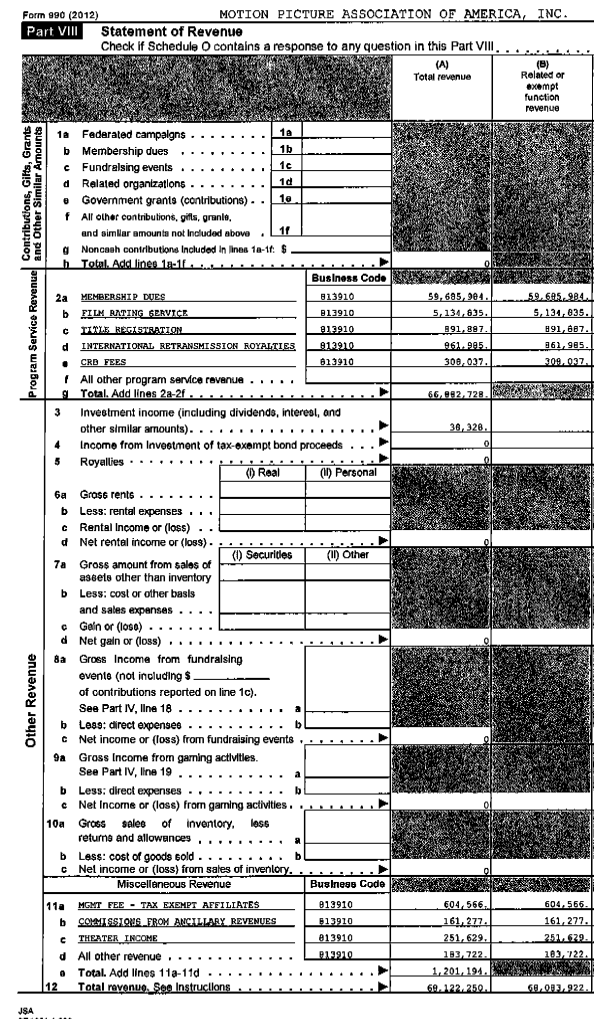 The paperwork further reveals that the Copyright Alert System cost the MPAA $475,000 in 2012, which is roughly a quarter of the total budget the new anti-piracy system was awarded that year.

Looking at some of the other expenses we see that the MPAA’s lobbying outlays remained relatively stable at $4.8 million. Legal costs were $10.3 million, and didn’t change much compared to the previous year.

Every year the MPAA also hands out several grants and in 2012 this included $127,150 to the Institute for Policy Innovation (IPI). The purpose of the grant is to “promote the film industry,” and perhaps in an effort to do so, IPI president Tom Giovanetti recently attacked our news reporting.

Another grant that’s not without controversy is the $100,000 Carnegie Mellon University received to start its “Initiative for Digital Entertainment Analytics.” A recent study from these researchers found that the Megaupload shutdown boosted movie industry revenues, a finding that aids the MPAA in its lobbying efforts.

While the MPAA’s budget increase over the past two years is notable, the $59.7 million paid by the Hollywood studios is still significantly lower than the $84.7 million they paid in 2007.

However, if the MPAA continues to book successes such as the recent isoHunt shutdown, the IMAGiNE bust, and the convictions of several streaming site operators, its budget may fully recover to that level in the years to come.