Well over six years have passed since Megaupload was shut down and it’s still unclear how the criminal proceedings will unfold.

Aside from Andrus Nomm’s plea deal, progress in the criminal proceedings has been slow.

Kim Dotcom and his former colleagues are currently fighting a legal battle in New Zealand to prevent their extradition to the US, for which the final decision has yet to be issued.

While all parties await the outcome, the criminal case in the United States remains pending. The same goes for the civil cases launched by the MPAA and RIAA in 2014, more than four years ago.

Since the civil cases may influence the criminal proceedings, Megaupload’s legal team previously managed to put these cases on hold, and last week they requested another extension.

This is not the first time that such a request had been made. There have been several extensions already, which caused some issues.

There were previously concerns that the long delays could result in the destruction of evidence, as some of Megaupload’s hard drives were starting to fail. However, after the parties agreed on a solution to back-up and restore the files, this is no longer an issue.

“With the preservation order in place, and there being no other objection, Defendant Megaupload hereby moves the Court to enter the attached proposed order, continuing the stay in this case for an additional six months,” Megaupload’s legal team informed the court this week.

Without any objections from the MPAA and RIAA, U.S. District Court Judge Liam O’Grady swiftly granted Megaupload’s request to stay both lawsuits until April next year.

And so that wait continues… 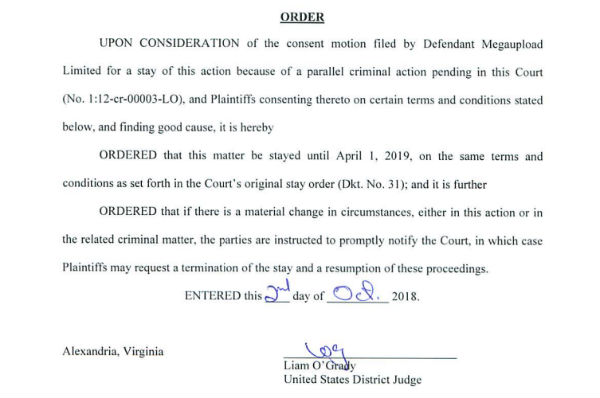