Four years ago Popcorn Time took the Internet by storm.

The software amassed millions of users by offering BitTorrent-powered streaming in an easy-to-use Netflix-style interface.

While the original developers shut down their project after a few months, following pressure from Hollywood, others forked the application and took over.

PopcornTime.io swiftly became the main Popcorn Time fork. The spin-off soon had millions of users and updates were pushed out on a regular basis. At the end of 2015, however, this fork also disappeared from the web.

The MPAA took credit for the fall announcing that it had filed a lawsuit against several people in Canada. In response to these legal threats, several key developers backed out.

Soon after, the MPAA also assumed control of the main domain name, ensuring that it could not fall into the wrong hands.

This worked well, initially, but this week we noticed that PopcornTime.io is active again. The domain now links to the pirate streaming site Stream.cr, which welcomes its new visitors with a special message. 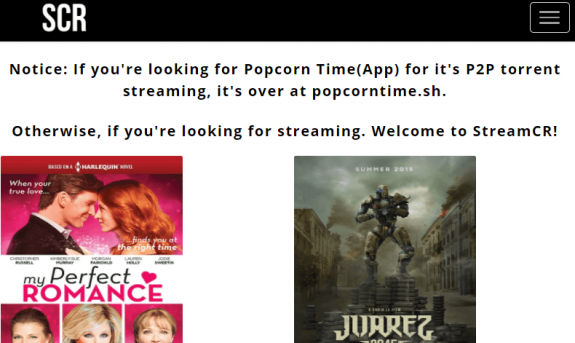 This is odd, considering that the PopcornTime.io domain name is still registered to the MPAA. 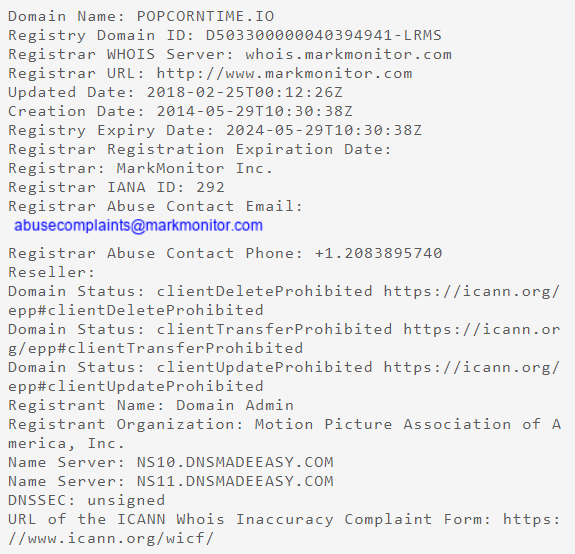 Adding to the intrigue is the fact that the PopcornTime.io domain registrar is listed as MarkMonitor, which is a well-known brand protection company, often used to prevent domain troubles.

“Protect your critical assets by partnering with a corporate-only domain registrar who has a strong security culture and is committed to providing the most secure and reliable solution in the industry,” MarkMonitor writes

However, since PopcornTime.io now links to a pirate site, something clearly went wrong.

It’s hard to say with certainty what happened. A likely option is that the domain’s nameservers, which point to DNS Made Easy, were not configured properly and that the people behind Stream.cr used that oversight to redirect the domain to their own site.

TorrentFreak spoke to a source unrelated to this case who says he was previously able to redirect traffic from a domain that was seized by the MPAA, simply by adding it to his own DNS Made Easy account. That worked, until the nameservers were updated to MarkMonitor’s DNS servers.

Whether the fault, in this instance, lies with the MPAA, MarkMonitor, or another party is hard to say without further details.

In any case, the MPAA is not going to be happy with the end result, and neither is MarkMonitor. The Stream.cr operators, meanwhile, are probably celebrating and they can enjoy the free traffic while it lasts.

Update: MPAA caught up and the site is now redirecting to an MPAA page.