Over the course of the past decade-and-a-half, the number of BitTorrent users has grown from a handful to a couple of hundred million. Usage is still massive but it’s now streaming that’s making strides.

Accessible via a standard browser or dedicated hardware devices, pirate streams of the latest movies, TV shows, and sporting events are now watched by millions in the comfort of their own homes, or even on the move.

Copyright holders everywhere are worried but it’s perhaps most evident in the UK where police and Trading Standards officers are targeting sellers of Kodi-enabled devices that have been modified to receive pirate streams. This week, as part of the forming Digital Economy Bill, Members of Parliament have been discussing potential amendments to UK copyright law aimed at clamping down on the sale of such devices.

“Android-based IPTV boxes are being loaded with software linking thousands of streams of infringing entertainment, movie and sport content. The boxes are sold on mainstream marketplaces such as Amazon and eBay, and through Facebook,” said Labour MP Kevin Brennan.

“The Copyright, Designs and Patents Act 1988 has yet to be updated to reflect the new technology. It offers no effective remedies to copyright owners, who at present can rely only on laws that are not particularly tailored to copyright infringement.”

Brennan said that police currently need to prosecute under the Fraud Act 2006, the Proceeds of Crime Act 2002, and the Serious Crime Act 2015. By amending the Copyright, Designs and Patents Act 1988, bodies such as Trading Standards would have an easier time prosecuting offenders, the MP said.

“New clause 33 would amend section 107(1) of the Copyright, Designs and Patents Act 1988 (CDPA) to create the new offense of supply of devices primarily used to infringe copyright. It is entirely logical to amend that section, which is concerned with ‘criminal liability for…dealing with infringing articles’, but which currently focuses only on physical copies of work and on communication to the public,” Brennan explained.

“The new clause would bring trading standards offices into the picture, empowering them to make investigations and to enforce the rules on such devices under section 107(1) of the 1988 Act. To minimize the risk of new and uncertain legal tests, concepts or unintended consequences, the drafting adopts for the most part language used elsewhere in that Act.” 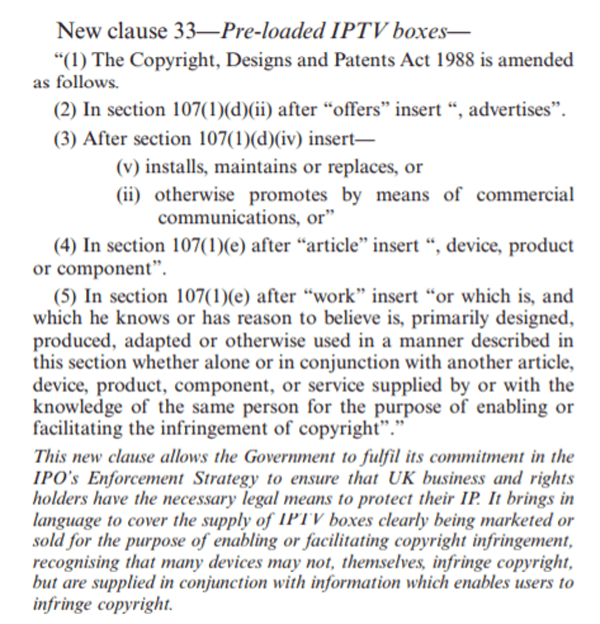 Support for the new clause came from the SNP’s Callum Kerr, who noted that people will continue to innovate when it comes to obtaining pirate content. Surprisingly, he also confessed that someone in Parliament actually encouraged him to buy a pirate box.

“Someone in [Parliament] recommended an IPTV box to me for my London flat because it is quite a cheap way of accessing content, but I did not follow that advice because I would not want to access any illegal content,” Kerr said.

“These boxes come pre-loaded, and there should be no pretense about it: they are designed to give people a way of avoiding paying for content that they know they should pay for. There is no excuse for that.”

Noting that the proposals for amendments to the CDPA have “a long list of supporters in the industry”, Brennan asked Matt Hancock, Minister for Digital and Culture, whether they could rely on his support too. Hancock said he understood the concerns but believes that current legislation (the Fraud Act 2006 and the Serious Crime Act 2015) can cope without having to modify the CDPA.

“This activity is already covered by criminal law under the Fraud Act 2006 and the Serious Crime Act 2015. The City of London police force is investigating cases. It seized over 500 set-top boxes earlier this year and arrested a man for fraud and IP offenses,” Hancock said.

“There is a danger in the digital world of legislating for a specific technology as opposed to legislating for the offense in a technology-neutral way. I strongly prefer the latter. As the law is already in existence in the two Acts that I mentioned, the best thing to do is to prosecute under the existing Acts, rather than try to chase a particular technology, which may well be out of date.”

Hancock told MPs that the government already has a strategy for tackling IP crime with a specific focus on dealing with the problem of IPTV and whatever technology eventually comes along to replace it. Sticking with existing legislation is the way forward, he said.

“The existing criminal ​offenses provide a legislative framework that is broad enough to protect our creative industries. However, I will of course keep this area under review,” he added, while asking for the new clause to be withdrawn. Brennan complied.

The fact that a request to amend the CDPA was rejected in this case raises questions over the current push to increase punishments for online copyright infringement offenses from two to ten years.

Many of the more serious online cases have also been successfully prosecuted under the Fraud Act, without any need to use the CDPA. Notably, these prosecutions were achieved without sucking in low-level offenders such as casual file-sharers.