NO. The Grand Tour is NOT The Most Pirated TV-Show in History. 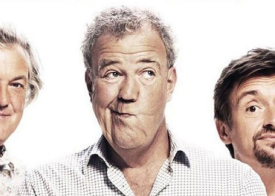 Statistics are generally pretty boring, but when pirates come into play it’s an entirely different story.

Yesterday, numerous self-respecting news publications ‘reported’ that Amazon’s Top Gear ‘inspired’ series “The Grand Tour” is now the most pirated TV-show ever, beating Game of Thrones, which held this title for nearly a decade.

While it sounds exciting, it’s not really true.

Admittingly, collecting piracy statistics is far from an exact science. However, even when we look at publicly available data it’s obvious The Grand Tour is no competition for Game of Thrones.

The confusion started with a report from the bastion of quality news reporting, The Daily Mail. “Clarkson’s TV comeback becomes the most illegally downloaded show in history,” it claimed.

The report cites data from piracy monitoring firm MUSO and suggests that the first episode was illegally downloaded 7.9 million times. More than any other show in history, the company’s chief commercial officer claimed.

“It is the most illegally downloaded programme ever. It is off the scale in terms of volume. It has overtaken every big show, including Game Of Thrones, for the totals across different platforms,” MUSO’s Chris Elkins said.

While we’re not going to dispute this number directly, the “most downloaded” claim is nonsense. First of all, it would be virtually impossible for any new show to be the most downloaded ever if it’s up against those that have been available for years.

But, let’s assume that we’re talking about downloads on a weekly basis. Even then, the signs are pretty bad. Looking at the most recent list of most pirated TV-shows on The Pirate Bay shows that several other shows currently outrank The Grand Tour by a wide margin, The Walking Dead in particular.

In addition, recent streaming data from several of the most popular streaming sites online places The Grand Tour behind The Walking Dead, which traditionally is far less popular than Game of Thrones.

TorrentFreak has kept a close eye on the most-shared torrents for The Grand Tour, which get roughly 20,000 people sharing simultaneously at their peak. Peanuts compared to Game of Thrones’ record, which sits at over a quarter million.

Also, the claimed “record” number of downloads is significantly less than our 14+ million estimate for Game of Thrones last year.

Even Muso itself indirectly disputes its own claim, as the quoted 7.9 million figure for the Grand Tour is lower than an estimate it previously gave for Game of Thrones.

We asked Muso itself for clarification and it appears that there has been some misunderstanding. The spokesperson for the company suggests that The Grand Tour is ‘just’ the most pirated UK TV show.

“Demand analysis across a three week monitoring period for episodes 1-3 of The Grand Tour placed it as having the highest volume of piracy views for a UK TV show in history, as well as the most piracy views in a debut season for a TV show.”

That sounds more like it. In addition, it’s probably also the most pirated TV show with the word “Grand” in the title, as well as the most illegally downloaded show about cars.

TorrentFreak asked the company for additional clarification on what data is covered in the 7.9 million estimate, as “piracy views” suggests that it’s about more than torrent downloads. It’s likely that MUSO also included a streaming estimate in its data, but at the time of publication we have yet to receive a response.

We don’t know whether MUSO was misquoted by The Daily Mail, but it’s safe to say that The Grand Tour still has a long way to go before it outpaces Game of Thrones, if it ever will.