Much like the movie industry, the major record labels have made a habit of attributing decreasing income from album and single sales to illegal downloading. Aside from the fact that most research has found no direct link between piracy and a decrease in sales, those who take a better look at how the money streams are divided will find that the musicians themselves are actually better off than a decade ago.

Last month the Times Online published an interesting graph plotting the various revenue figures over the last 5 years, as reported by the UK music industry themselves. The data clearly shows how the distribution of music industry income has shifted over time. Music labels earn less from recorded music today than they did five years ago, while artists have seen a huge increase in revenues from live performances.

In part inspired by the Times Online article, Swedish researchers came up with similar calculations for the Swedish music industry, which reached a very similar conclusion. Since Napster and later Limewire and BitTorrent gained an audience of hundreds of millions of people, less revenue was made from album and single sales.

For the people who actually perform on stage the outcome is entirely different though. Revenue for musicians actually went up through increased income from live gigs, perhaps thanks to piracy which offers an easy tool to discover new music. Please note, however, that no causal relationship between illegal filesharing and music revenues has been researched. 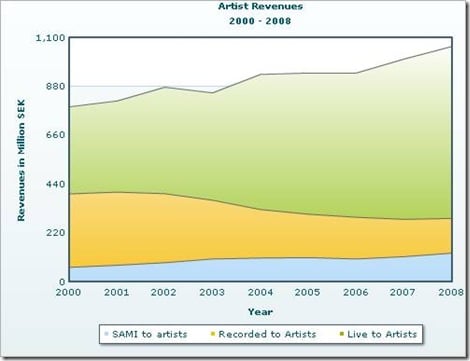 What is crystal clear from the data, though, is that the revenue streams within in industry are quickly changing. This hugely benefits the musicians who now get a much bigger share of the proverbial pie than a decade ago. Much of this shift can be attributed to the increased income from live performances which nearly doubled to 774 million Swedish Kroner in 2008.

The income figures for the music industry as a whole are less positive though. The overall revenue for the music business has remained pretty much the same since 2000, and that’s just the raw number without an inflation correction. 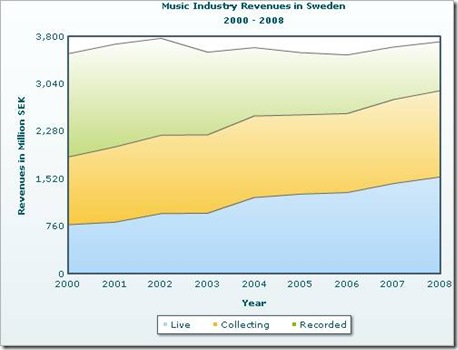 TorrentFreak contacted Daniel Johansson, researcher at the Royal Institute of Technology, who carried out the research together with his colleague Markus Larsson. Johansson told us that he’s not a supporter of theories suggesting that illegal downloading benefits musicians.

“I can not say anything about how filesharing has influenced the figures, since that is not part of the study,” Johansson told TorrentFreak. “Everyone seems to make the assumption that file sharing is ‘good’ for artists because of this, I disagree,” adding that he cannot back this up with data.

Nevertheless, some have argued that illegal downloading makes it easier to discover new artists, which may indeed boost the number of concert visits, explaining the study’s findings. Another explanation could simply be that the tickets for live gigs have doubled since 2000, while the attendance didn’t increase or decrease.

Whatever the reasons, musicians are doing better now than at the beginning of the decade, despite or in spite of piracy.