Over the last year, TorrentFreak has covered the controversies surrounding the Digital Economy Bill (DEB) extensively. ISPs don’t want it, many MPs don’t want it, the legal profession doesn’t think it’s legal and over 20,000 people have emailed their elected representatives to voice their displeasure.

Championed by Baron Mandelson after an entirely coincidental holiday meeting with Dreamworks co-founder David Geffin, the Bill has now taken another step in its rush to become law before the end of Parliament, despite all the protests and criticisms.

The Bill, which the UK Pirate Party say “will shape the future of technological and artistic progress” was not important to most MPs. Through the 5 hours of debates, only around 20 MPs were present, including just one from the Liberal Democrat party  – Don Foster (Lib-Dem, Bath) – who had pledged not to vote for the Bill. 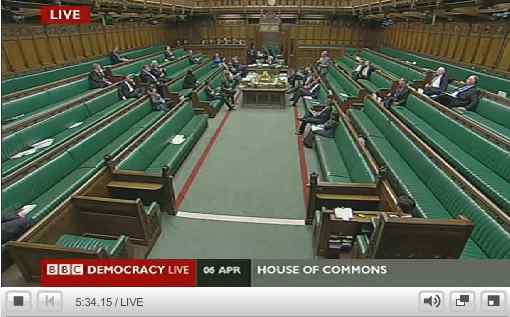 The scene at 9:45pm after 5 hours of speeches

Debate was mostly back and forth over the contentious issue of disconnections, but industry figures and unverified estimates were again quoted as fact. Many (including Labour MPs) were outraged at the Government for having left it so late to try and rush through a Bill as complex and controversial as this. It did, however, get passed at this second reading and will be taken to a third tomorrow.

The low turnout didn’t stop the invective, however, or the silly comments, lies, inaccuracies and other miscellaneous statements, all of which were picked up on Twitter (over 16,000 tweets under the #DEB and #DEBill tags), and analyzed a great deal more thoroughly than by these MPs that had apparently read the Bill. Some of the most memorable points include:

The Bill passed despite extensive opposition from many MPs present, who had concerns over specific amendments and the breakneck pace the Bill is being forced through with virtually no debate. The sensible suggestion that it be left for the next Government to reintroduce was derided as it is “needed now”, despite the fact that those industries have not only survived, put prospered without the Bill for the last 10 years.

Meanwhile, the MPs were not so much concerned with the public outcry, as the sartorial comments on Twitter. The Bill now gets a total of two hours for Committee, Reports and its third reading later today, after which it will be (probably) passed.

The first two hours of debate can be watched on the BBC website and the transcripts are here. The third reading of the DEB is scheduled for tonight and if the bill passes it will head over to the Lords where it will be signed into law.