For nearly half a decade uTorrent and Vuze have been two of the leading BitTorrent clients. If we leave out China, the two applications together hold three quarters of the market share which equals close to 100 million users a month.

In an attempt to determine which of the two get the best download speeds, University of California researcher Marios Iliofotou together with colleagues from Telefonica Research inspected the download speeds of more than 10 million BitTorrent downloaders last August. The results have been collated in a short paper (pdf) and it turns out that there are some big differences between the two BitTorrent clients.

As an initial sample the 600 most popular torrents on the Pirate Bay were used. The torrents were tracked for a month and a representative sample of one week was used for the final analysis. For each torrent an equal number or uTorrent and Vuze users were selected and these were also matched by ISP, so the type of torrent or ISP could not influence the results.

More detailed analysis revealed that uTorrent users get faster downloads on all of the 30 most used ISPs, except Verizon where there was virtually no difference. On 10% of these ISPs, uTorrent users were downloading 30% faster than Vuze users. 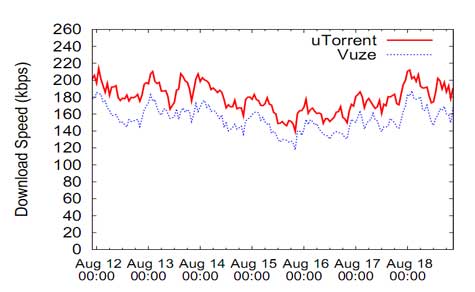 To find out what might be responsible for these speed differences the researchers reverse engineered both BitTorrent clients. They speculate that the distribution of upload capacity to peers is one of the underlying reasons. On average, uTorrent shares data with more peers than Vuze.

Differences in how the clients handles connections to ‘neighbors’, how they discover new peers and when they decide to close connections are also mentioned as factors that may have led to the observed speed differences.

The scope of the report is limited to Vuze and uTorrent but in future work the researchers hope to include other clients too. In addition they plan to confirm these results in a lab environment, to try and find out what constitutes the fastest BitTorrent client.

“This work does not aim to design the best BitTorrent client, but to bring to the attention of BitTorrent implementors and users that some design choices have a significant effect in practice. Even though in our study uTorrent appears to achieve faster speeds than Vuze, we do not claim that uTorrent is the way to go,” the researchers write.

“We hope that our preliminary findings will open the door for new research efforts to better understand the impact of design choices in the performance of real-world BitTorrent implementations. Ultimately, we see such research efforts leading to the design of better P2P systems,” the researchers conclude.