In February 2010, the Supreme Court in Italy decided that ISPs could be forced to block file-sharing sites, even those located outside the country and run by foreigners.

The first victim was The Pirate Bay, which became (officially at least) unavailable in Italy after all the country’s ISPs blocked the site. In March, Labaia – which functioned as a Pirate Bay proxy enabling Italians to continue accessing the site – was shut down by Italian police.

Now, in fresh action by the authorities, the police in conjunction with local anti-piracy groups have shut down LinkStreaming.com, Italy’s most popular movie streaming links location and the 50th most popular site in the country.

Coordinated by Dr. Giangiacomo Pilia, Deputy Public Prosecutor at the Court of Cagliari, Operation “Little Angel” had been underway since February 2010 with the assistance of FPM (Federation Against Music Piracy) and FAPAV (Audiovisual Anti-Piracy Federation). 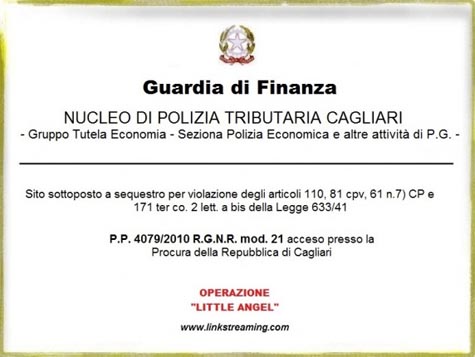 LinkStreaming was hosted by PRQ, Sweden’s most infamous “bullet-proof” hoster which was previously run by Fredrik Neij and Gottfrid Svartholm of Pirate Bay fame and the current host of WikiLeaks.

Although currently completely offline for visitors outside Italy, according to the police the site was first rendered inaccessible to Italian users. In future, local Internet service providers will take steps to ensure that Italians can never access the site, in the traditional ways at least.

Even though it’s believed that LinkStreaming merely linked to content, the operation against the site continued and culminated in searches in three different regions of the country putting six administrators under investigation. According to the police, those suspects are believed to have made available copyright movies to the public for profit and as such risk imprisonment of between 1 and 4 years along with fines up to 15,000 euros.

FIMI, the local division of the IFPI, welcomed the police operation to close the site.

“I hope that other sites still actively operating servers with illegal content in Italy or abroad, will now decide to voluntarily cease trading without risking complaints and seizures,” said IFPI Chairman, Enzo Mazza.

Anti-piracy results in Italy have been somewhat of a mixed bag lately. Although FAPAV largely lost their case against ISP Telecom Italia recently, it now seems that sites deemed to be commercial in nature can be shut down quickly by the authorities.