With millions of users worldwide Popcorn Time is one of the most used pieces of software.

This success has also caught the attention of scammers, who launch rip-off sites to lure people into downloading malware or paying to obtain the client.

In recent months the developers of the original Popcorntime.io fork have received numerous complaints about “unofficial” releases.

“We’ve been dealing with reports about malware in Popcorn Time for a long time, and constant questions via email, Reddit or on our forums complaining about malware or other malicious copies,” the Popcorntime.io team informs TF.

“We felt it was time to publish a blog post about it in order to clear it up with a proper answer, and help prevent the constant questions so we can dedicate our time elsewhere.”

A search for “Popcorn Time” on Google does indeed return a long list of websites that contain shady links and popup ads. Also, there are sites that require people to pay or like them on Facebook, before allowing people to download anything.

Confusingly, all these Popcorn Time websites have more or less the same layout, so prospective users should tread carefully.

“…we warn you that we’re victims of our own success and you should always be careful: The ‘Popcorn Time’ branding is used a lot by malicious people trying to surf the wave and make a profit,” Popcorntime.io explains.

“This means you may find in some of these websites either non-working applications, which are simply a genuine waste of time and bandwidth, or – and this is worse – end up with viruses, adware or other trojan horses infecting your machine.”

To point users in the right direction the Popcorntime.io developers have made a flow chart, which is featured below. Interestingly, the developers also list Netflix as an option for people who are willing to pay. 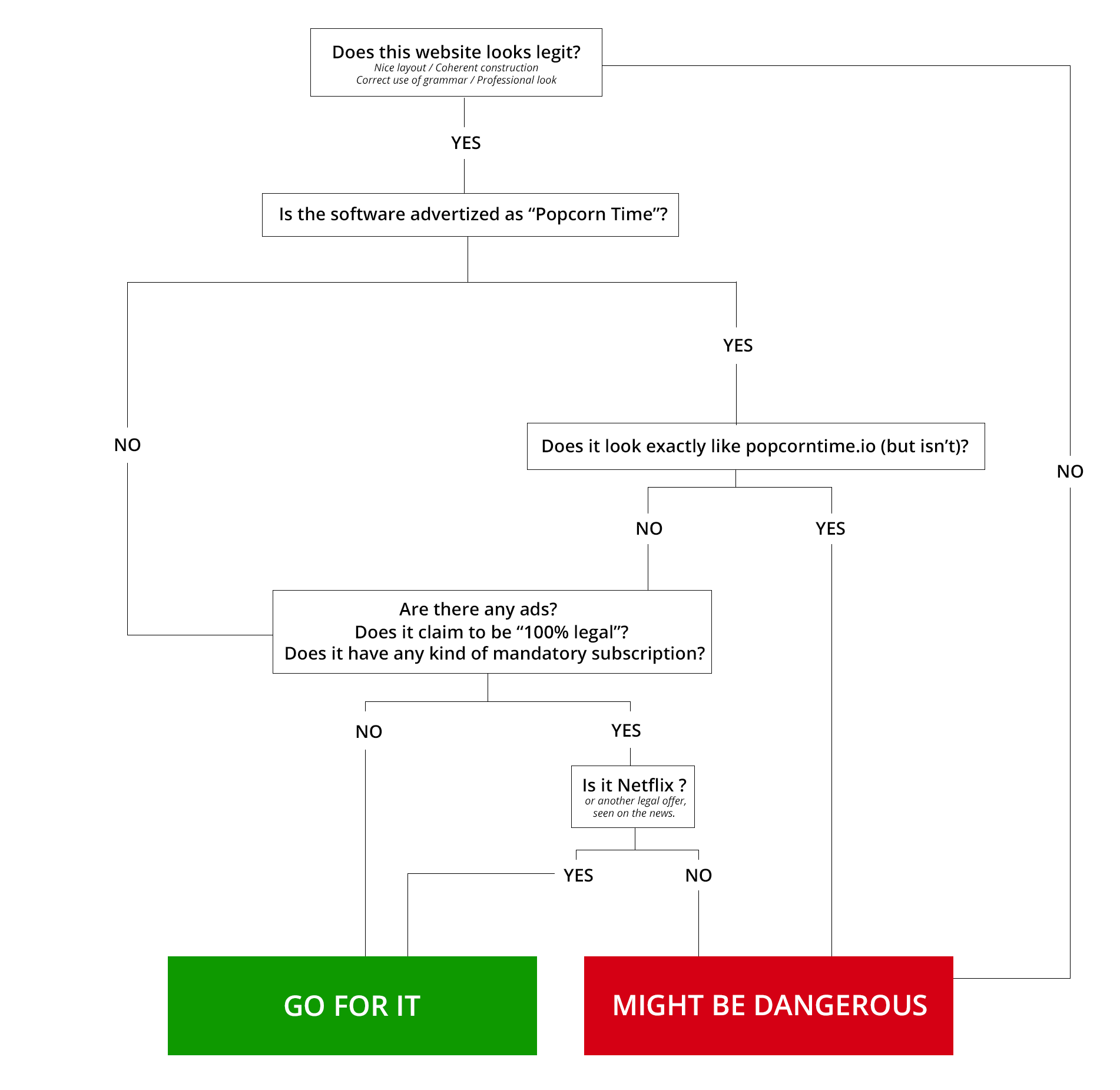 Although it has to be said that there are several harmless Popcorn Time forks out there, including those listed earlier, the scammer problem is definitely a growing concern.

On that note, we also asked the Popcorntime.io team why they still use torrents from the compromised EZTV.ch site. We were informed that they’re looking for a good alternative, without any signs of malware. They will use the hijacked site in the meantime.

“While we’re working on moving we haven’t noticed any infected video from the compromised EZTV site and believe it to be acceptable while we work on finding the replacement rather than simply taking TV shows out of the application for the time being,” they inform TF.

Yet another pitfall to be on the lookout for.