The RIAA is upset because Google refuses to remove the popular “MP3 Music Download Pro” app from the Android market.

“We sent a takedown notice to Google in August for this particular app, which is clearly being used for illegal purposes, and Google responded that they were declining to remove it from the Android Market,” an RIAA spokeswoman told PCMag.com. 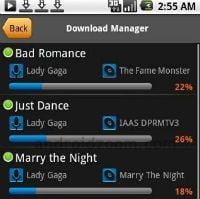 “We continue to have concerns with Google’s screening and takedown procedures and hope that they will be improved.”

The RIAA and other entertainment industry groups have been pushing hard against Google to take down apps they deem to be infringing.

Although the company is generally very cooperative, the groups are not always pleased with the slow response times.

Last month Google deleted the popular Frostwire app from the Android market, but it’s unknown whether this had anything to do with complaints from groups like the RIAA.