For years entrepreneurs around the world have listened intently to entertainment companies and their tales of losing billions to piracy. Given the scale of the alleged losses, serious riches must lie in wait for the company with a workable solution.

One of the outfits dreaming of piracy-into-profit alchemy are the folks at Rightscorp. They sign up rightsholders, track people sharing their content on BitTorrent, and send a bill to alleged pirates to make imaginary lawsuits go away. Unlike other ‘trolls’, however, Rightscorp only asks for around $20 per infringement, a relatively cheap deal considering the many thousands demanded elsewhere.

While it sounds simple enough, the company can’t seem to make it profitable. They argue that it’s still early days (the company only went public in 2013) but the figures don’t lie. Last year Rightscorp lost $3.4 million and during the first quarter of 2015 and despite sounding as optimistic as ever, the company burned through yet more cash.

In results published last evening, Rightscorp revealed that it had grown in several key areas during the first quarter, not least the number of copyrights the company has deals to protect. Including two new contracts signed in January for 250,000 copyrights, the company now has 1.5 million in its “authorized copyright catalog”. Currently, however, just 256,000 are in the full Rightscorp system.

The number of ISPs cooperating in the scheme is up too, from 50 ISPs in March 2014 to more than 233 ISPs in March 2015. With that uplift of 466%, Rightscorp says it now has access to 15% of all homes in the United States and in the past two years has closed 200,000 cases of copyright infringement

For the first quarter Rightscorp’s operating costs were in excess of $1.2m, a far cry from the $300K it brought in. The company blames part of the losses on fees it pays to copyright holders (roughly 50% of revenues) but that only accounts for $154K.

Legal costs are also on the rise. In addition to all the usual advice needed to run a company, Rightscorp is currently being sued over the methods it uses to collect cash from alleged pirates. As a result legal costs for the quarter were $182,543, up from $114,242 in the same period last year. 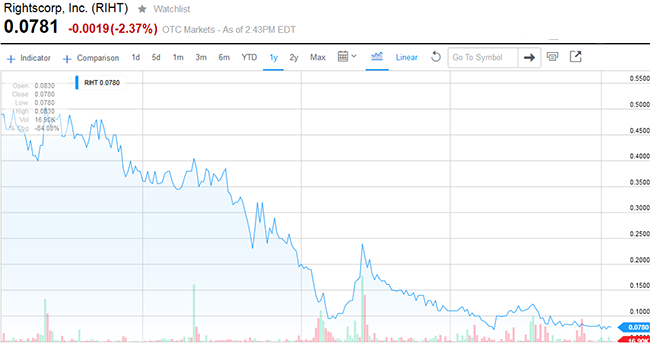 As the image above shows, the company’s current position doesn’t look good, a point raised last evening during a conference call with investors.

“What could you say about the fact that the stockholder value has gone down about 80% in the last year, in spite of the fact that you’ve done two private equity raises?” one caller questioned.

“We think this is a great time to get involved with a company as a shareholder,” Rightscorp COO Robert Steele responded.

“Fundamental investment thesis continues to be proven out. So with approximately 250,000 copyrights being monitored we generated $300,000 in top line revenue, there are 27 million Apple copyrights on iTunes, so this can be an enormous business.”

But despite the optimism the company’s latest filing paints a bleak picture of the future.

“The Company has not yet established an ongoing source of revenues sufficient to cover its operating costs and to allow it to continue as a going concern,” the filing reads.

Only time will tell if Rightscorp will eventually be able to turn piracy into profit, but if current trends continue, each notice sent will only generate a loss. The secret may lie in increased volumes and economies of scale, but if the company feels under serious threat it may seek to up its $20 settlement fee to something more practical. Keep an eye out for that.