It is no secret that the MPAA and other pro-copyright groups lobby politicians and law enforcers, but when a column by a prominent Attorney General appears to be written directly by the entertainment industries something is horribly wrong.

A few days ago Utah Attorney General Mark Shurtleff wrote an article in the Salt Lake City Tribune. In the column the Attorney General stresses how important it is for Congress to pass the SOPA and PIPA bills. The MPAA is delighted with the support and praised it in a blog post yesterday.

“Shurtleff effectively hammers the point that Google, Yahoo and others have spent millions trying to distort – that states which allow rogue websites to operate unfettered will experience massive revenue reduction and job loss,” the MPAA writes.

The Attorney General’s statements do indeed bolster what the MPAA and other pro-copyright groups have said all along. By itself this is not unusual, but when we examined the article in more detail we began to notice that many of the sentences that are passed off as Shurtleff’s work actually look very familiar.

Could it be that the column was partly written by the MPAA?

We say yes. To back up this claim we will highlight a few sentences from the Attorney General’s article, and compare them with those previously delivered by the MPAA and affiliated pro-copyright groups.

The first sentence that caught our attention is: “It will take a strong, sustained effort to stop Internet thieves and profiteers.”

Strong words, but also familiar ones. In fact, former MPAA President Bob Pisano uttered exactly the same words in 2010 when he congratulated the Senate Judiciary Committee with unanimously approving the COICA bill, the predecessor to SOPA and PIPA. 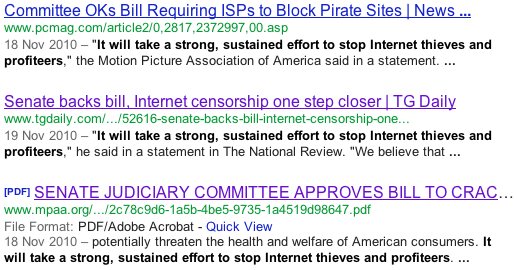 But that’s just the tip of the iceberg really. Here’s another example.

“Congress can make a significant contribution to that effort with legislation to strengthen law enforcement tools. In the interests of American citizens and businesses, it is time for Congress to enact rogue sites legislation.”

The sentence above is copied from a pro-COICA column (bottom paragraph) written by Mike McCurry, co-chairman of the pro-copyright outfit Arts+Labs. At the time, McCurry’s piece was praised by pro-copyright lobby groups and in his writing McCurry also uses the previously mentioned sentence from the MPAA’s former president.

But there’s more. The column from McCurry, which is often quoted by the MPAA and affiliated groups such as FightOnlineTheft, displays more similarities with the article published by Attorney General Mark Shurtleff.

For example: “[Rogue sites legislation] cut off foreign pirates and counterfeiters from the U.S. market and deprives them of what they want most — our money. By disrupting the business models of these online criminals, this legislation would make it less profitable and more difficult for those who wish to engage in blatant intellectual property theft.”

Now compare that to this quote from McCurry’s MPAA-inspired column which is nearly identical, far beyond what can be called a coincidence.

The Attorney General was also directly inspired by the Coalition Against Counterfeiting and Piracy, a Chamber of Commerce outfit that belongs to the same pro-copyright clique.

Compare: “[rogue sites] represent the worst of the worst infringers on the Internet, are a threat to our economic security and they have no place in a legitimate online market.”

..to this quote (PDF) “[rogue sites] represent the worst of the worst on the Internet, and have no place in a legitimate online market.” And the list goes on.

Although we can’t say with certainty that Attorney General Mark Shurtleff was fed by the MPAA directly, it is obvious that the article wasn’t written by him. It’s a collection of ripped off sentences that can be directly traced back to the MPAA and affiliated groups.

This is quite a concern coming from someone who is supposed to be objective, especially considering that this Attorney General will have the exclusive power to grant requests for domain seizures and DNS blockades if SOPA or PIPA passes. The way we see it now, this Attorney General is clearly in the pockets of the pro-copyright lobby.

Holmes Wilson of the citizen rights group Fight for The Future agrees with this assessment.

“This is a reminder that SOPA/PIPA—the language, the money behind it, and the arguments used to justify it— are coming straight from the same place: the copyright industry,” he told TorrentFreak. “It’s possible that they’re turning up the heat in Utah in response to the meetings Utah residents have scheduled with Utah Senator Mike Lee.”

Unfortunately this isn’t an isolated incident. A lot of seemingly independent groups that recently supported PIPA and SOPA use the exact same language that appears to be fed to them by a single source.

Just Google the sentence “Criminals have turned to the Internet, abusing its virtually unlimited distribution opportunities,” and you’ll see that it was used in pro- SOPA/PIPA letters by the National Governors Association, Public Safety and First Responder Groups and others. Letters that were coincidentally all highlighted on the MPAA blog.