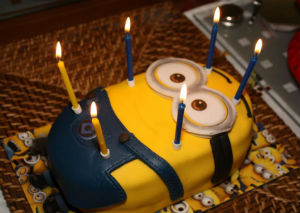 Birthdays are the highlight of the year for most children and what better way to celebrate than with a cake featuring their favorite cartoon character.

Although the parents and local pastry shops may be well-intentioned, there are lurking copyright issues that can easily spoil the party.

This issue is currently on debate in Croatia where nearly all pastry shops have received legal threats for their use of popular cartoon and movie characters. Facing fines in the range of $300 to $1,000 they are urged to stop baking infringing cakes.

The company is a partner of Finsbury Food Group and has the exclusive rights to sell cakes with Disney characters. In addition the chain also secured the rights to use Nickelodeon, Astley Baker Davies and Universal Studios characters, which covers most popular cartoons.

With the legal claims the pastry chain hopes to prevent the competition from selling “infringing” cakes, so more people will choose to buy their products instead.

Ana Marcelić, owners of Zagreb’s pastry shop Fancy Cake was one of the recipients who received a threatening letter.

“We are appalled by this decision which we consider unfounded and unfair. It is a huge loss for us, because the penalties are terrible, and it is a difficult situation to explain to the customer,” Marcelić told Jutarnji.

“We can inform parents about the situation, but how do you explain the legal situation to children who are screaming because they simply want Elza on their birthday cake?”

Just to clarify what is allowed and what isn’t, a representative of the Association of Pastry Caterers contacted the law firm to get clarification, but thus far it only received an ambiguous response.

There haven’t been any reports of damage claims against disobedient pastry makers yet, however, if the pirated cakes continue to be sold offenders could eventually face a copyright infringement lawsuit.