SOPA Author Is a Pirate, A Repeat Offender

While the Stop Online Piracy Act (SOPA) continues to dominate the news, the people responsible for the bill continue to break their own rules.

A few weeks ago several SOPA sponsors were caught posting copyrighted videos on their personal websites.

Under SOPA this is considered to be a felony, punishable by 5 years in prison.

One of the most prominent ‘criminals’ was SOPA author Lamar Smith, who as it turns out, is a persistent copyright infringer.

Vice reports that Smith used a Creative Commons licensed photo on his site without attributing the author.

“I do not see anywhere on the screen capture that you have provided that the image was attributed to the source (me).” photographer DJ Schulte told Vice.

” So my conclusion would be that Lamar Smith’s organisation did improperly use my image. So according to the SOPA bill, should it pass, maybe I could petition the court to take action against www.texansforlamarsmith.com.”

Of course Smith and his team were quick do hide all traces to the infringing material, but the screenshot below should suffice as evidence (partial credit to DJ Schulte). 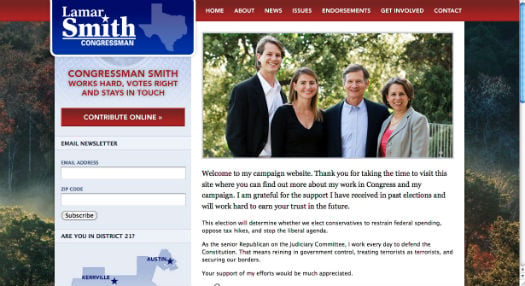