The Internet Revolts Against Anti-Piracy Censorship

In response to the pending SOPA (“Stop Online Piracy Act”), leading civil liberties and tech policy organizations are calling for a Internet-wide day of protest against censorship.

The event is dubbed “American Censorship Day,” because it will take place on the day of House hearings on the legislation that will introduce web censorship in the U.S.

The groups say that under the new legislation, America’s Internet could no longer be free and open as it is now, but controlled by large entertainment industry companies and their fear of piracy. As a result thousands of perfectly legitimate Internet services have to fear for their existence.

Sites are encouraged to participate. All the have to do is put a code snippet on their site so all U.S. visitors will be “alerted.”

Visitors to these sites will then see a splash-page (see below) with a seizure notice that allows them to contact Congress to vote against the pending anti-piracy bills (they can click it away and it will only be shown once). 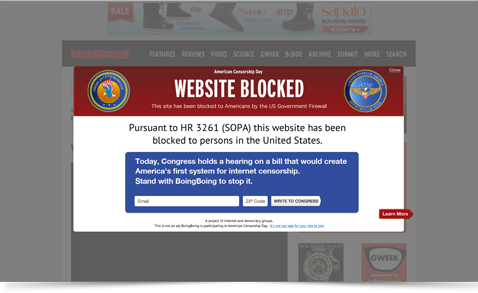 “SOPA gives the government and any corporation the power to block entire websites– that’s both wrong and dangerous,” said Holmes Wilson, co-founder of Fight for the Future and one of the protest’s organizers.

“SOPA Makes it so any copyrights holder who didn’t like just one webpage with an infringing link could contact payment processors to cut off the site. Payment processors have to respond in 5 days or risk liability down the road. SOPA is a workaround to the due process of the law,” said Tiffiniy Cheng, co-founder of Fight for the Future.

“This is a dangerous bill. It is an unwarranted expansion of government power to protect one special interest, the Big Media companies, would give Internet Service Providers a way to evade open Internet rules on the basis of ‘protecting’ copyright and allow advertisers and Internet registrars carte blanche to close down a site for the vaguest of reasons,” said Gigi B. Sohn, president and co-founder of Public Knowledge.

“This legislation is just another salvo in the big media companies’ war on sharing. They want the taxpayers’ government to fund their legal assault on the public’s freedom. Even worse, they want it done regardless of the collateral damage to perfectly legal uses of the Internet,” said Free Software Foundation executive director John Sullivan.

“In essence, Hollywood is tired of those pesky laws, like the First Amendment, fair use, and the DMCA safe harbors, that have helped protect innovation, economic growth, and creativity rather than outmoded business models,” said Corynne McSherry, Intellectual Property Director at The Electronic Frontier Foundation.

TorrentFreak is of course happy to participate.