Founded in 2003, UK-based FileSoup was one of the original torrent sites but in 2009 two former administrators of the site were arrested following a FACT investigation.

Two years later, however, the case collapsed and the men were free to go. Now, more than three years on, the FileSoup domain has been resurrected.

It’s a search engine / proxy, but not as we know it

The new site has no connections to the original owner, but there are several unique aspects to the relaunch of FileSoup that make for an interesting project.

On a basic level FileSoup acts as a meta-search engine variant. It covers four major torrent sites – The Pirate Bay, KickassTorrents, Torrentz and ExtraTorrent – each selectable via a drop-down box. It also acts as a reverse proxy for these sites to unblock them in countries where they are inaccessible, the UK for example. 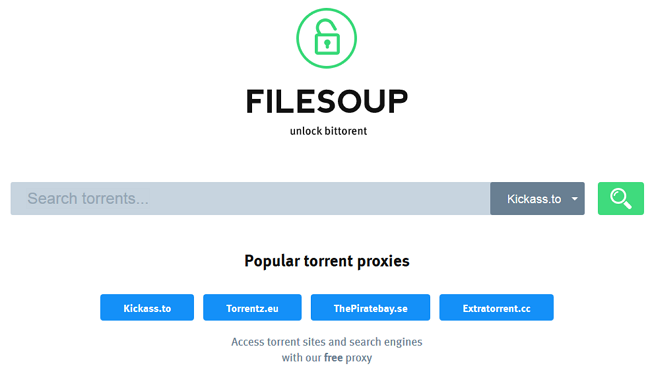 But FileSoup is no ordinary proxy. Instead of simply mirroring the content it finds on sites such as KickassTorrents, it actually attempts to improve on the results by caching third party site indexes.

“Let’s say Kickass.to receives a [DMCA] notice and deletes the content. We are not simply proxying but also caching the site. This means we can provide the page content even if Kickass.to has deleted the URL due to a DMCA complaint,” FileSoup informs TorrentFreak.

So in theory (and given time to cache – the site is still getting off the ground), FileSoup should be able to provide access to content previously taken down from other sites it proxies. To see whether it’s anywhere near to that goal, we conducted a search for one of the most talked-about franchises of the year – Expendables.

The images below show the results from FileSoup and KickassTorrents for exactly the same search. FileSoup returned 139 results while KickAss returned 115. Also notable (aside from the inserted malware ads on top of the search results) is the prominence of highly-seeded Expendables 3 results in the top placed positions on FileSoup. 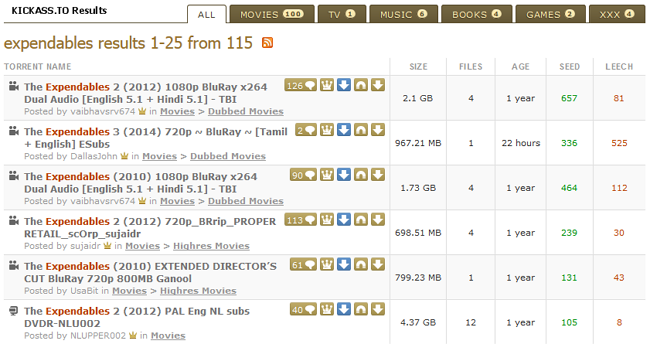 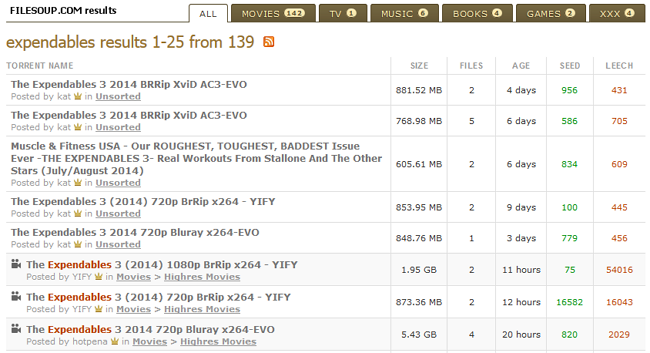 Other searches produced varied results but since FileSoup is just getting off the ground it will need more time to cache significant amounts of taken-down content. But what happens when FileSoup itself is subjected to takedown notices of its own?

The operators of FileSoup also addressed indirect search engine takedowns. Every week rightsholders force Google to remove torrent listings from its search results. For this problem FileSoup says it has a solution, and a controversial one it is too.

The team behind the site say they have developed a web crawler designed to pull the details of content subjected to DMCA notices from two sources – Google’s Transparency Report and the Chilling Effects Clearing House. From here the links are brought back to life.

“We created a technology that crawls DMCA notices and resurrects the torrent webpage under a different URL so it can appear in search results again. It was rather complicated to sharpen it, but eventually it works pretty well. We will use it on FileSoup.com for all the websites we proxy,” FileSoup explain.

“It will lead to a situation when KickaAss.FileSoup.com (for example) will have more pages indexed in Google than the original Kickass.to because we will revive pages banned by DMCA within Google search results. We call this technology the Necromancer.”

The idea of manipulating publicly available sources of copyright notices to reactivate access to infringing content is not new but this is the first time that a site has publicly admitted to putting theory into practice. Whether FileSoup will be able to pull this off remains to be seen, but if it does it could signal the biggest game of whac-a-mole yet.