DJ Deadmau5 is known all over the world for wearing an oversized headpiece with mouse ears during his live performances.

The ears have become a trademark for the DJ, whose real name is Joel Zimmerman, and in April he wanted to formalize this through an official trademark application at the U.S. Patent and Trademark Office. The logo is already trademarked in dozens of countries, and the U.S. seemed a logical next step.

Disney clearly disagreed and this week the company filed a 171-page opposition to the trademark application, claiming it would hurt the company’s business.

Deadmau5 wasn’t impressed by Disney’s efforts and took his anger to Twitter. The DJ noted that he wouldn’t give in to “a money hungry corporation over some bulls–t,” and questioned their motives.

“Disney thinks you might confuse an established electronic musician / performer with a cartoon mouse. That’s how stupid they think you are,” he wrote on Twitter.

Disney thinks you might confuse an established electronic musician / performer with a cartoon mouse. That's how stupid they think you are.

The mouse fight was on and a few hours ago Deadmau5 retaliated with a rather surprising counter attack. As it turns out, Disney is hosting a Deadmau5 video on their website, without permission.

Responding to this blatant act of piracy the DJ instructed his legal team to go after the media empire. They sent a cease and desist letter to Disney which Deadmau5 forwarded to the company on Twitter, with a personal note.

The letter explains that Disney is using Deadmau5’s work without permission and demands an immediate halt to this infringing behavior. 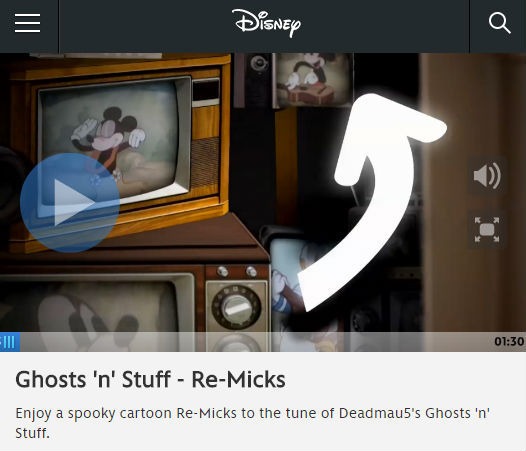 In addition to copyright infringement, the letter also states that Disney is using Deadmau5’s trademarks without authorization. The lawyers urge the company to stop this unauthorized exploitation of the DJ’s name and likeness as well.

“Disney prominently features the deadmau5 Mark next to the Infringing Video. implying a non-existent endorsement by Zimmerman,” the letter reads.

“Again. we are unaware of any license allowing you the right to reproduce, distribute or otherwise exploit the deadmau5 Mark or to exploit Zimmerman’s name and likeness in connection with same.”

At the time of writing Disney hasn’t complied with the request, but it seems that they have no other option than to comply. Whether it will change anything in their stance towards the DJ’s mouse ear trademark application is doubtful though.