In common with many other online services, copyright holders regularly ask Twitter to remove tweets that link to pirated material.

If a user decides to post a link to a pirated blockbuster or music track there’s a good chance that it won’t be online for long. In addition, the Twitter user may have his or her account suspended.

The latter happened to the accounts of Spain’s largest torrent site EliteTorrent and the linking site Bajui recently, both following a copyright holder complaint. However, both accounts had refrained from linking to pirated material.

The takedown notices in which the accounts were targeted were sent by the Spanish company Golem Distribución, who own the distribution rights of the film “Cut Bank.” They both reference tweets where the title of the film was mentioned alongside the film poster.

In its copyright and DMCA policy Twitter explains that it takes action against “tweets containing links to allegedly infringing materials,” but EliteTorrent and Bajui didn’t post any links, just text and a film poster. 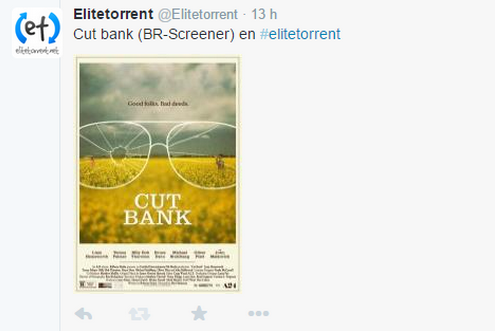 Morphoide, the founder of the Elitewebs Network which includes both EliteTorrent and Bajui, initially thought that the tweets were flagged because of the image. However, the DMCA notice makes no mention of this.

Instead, Golem Distribución accuses the accounts in broken English of distributing the film on their respective websites, not Twitter.

“According to the protocol of the DMCA (Digital Millennium Copyright Act): We have noted that the websites own, is offering free downloads and/or streaming of the work ‘CUT BANK’ belonging to GOLEM DISTRIBUCIÓN,” the notice reads. 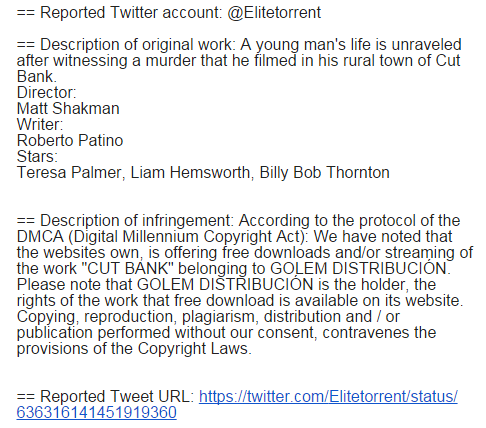 Morphoide is disappointed with Twitter’s decision and informs us that he specifically chose not to include any links to avoid this kind of trouble.

“There were no links in the tweets. I stopped linking a long time ago because I didn’t want my account to be suspended for doing so,” Morphoide says.

Apparently even tweets without links can be flagged and both sites have had their accounts suspended as a result. This means that thousands of followers are gone, just like that.

The site’s founder says he has lost faith in Twitter and doesn’t intend to appeal the suspension.