In 2010 Richard Humphrey was sentenced to 29 months in prison for operating several pirate sites, including the popular USAWarez.com and USATorrents.com.

Earlier this year Humphrey, who is a well-known and controversial figure in the warez community in various roles, went back to jail after he violated his probation of an unrelated offense. This time he was sent to Lorain Correctional Institution in Ohio, where he was surprised to see that pirated copies of “Ride Along” and “Wolf of Wall Street” were being played for inmates.

According to Humphrey the movies were shown while they were still playing in theaters and had clear earmarks of being pirated copies. Baffled by this apparent display of deviant behavior by prison staff, Humphrey notified the Deputy Warden and the Warden about his complaint.

Below is a copy of the kite (written request) that was sent to Warden Clipper, who confirms the reported issue. “Your concerns have been addressed in the past but it appears that this activity is still taking place,” Clipper writes. 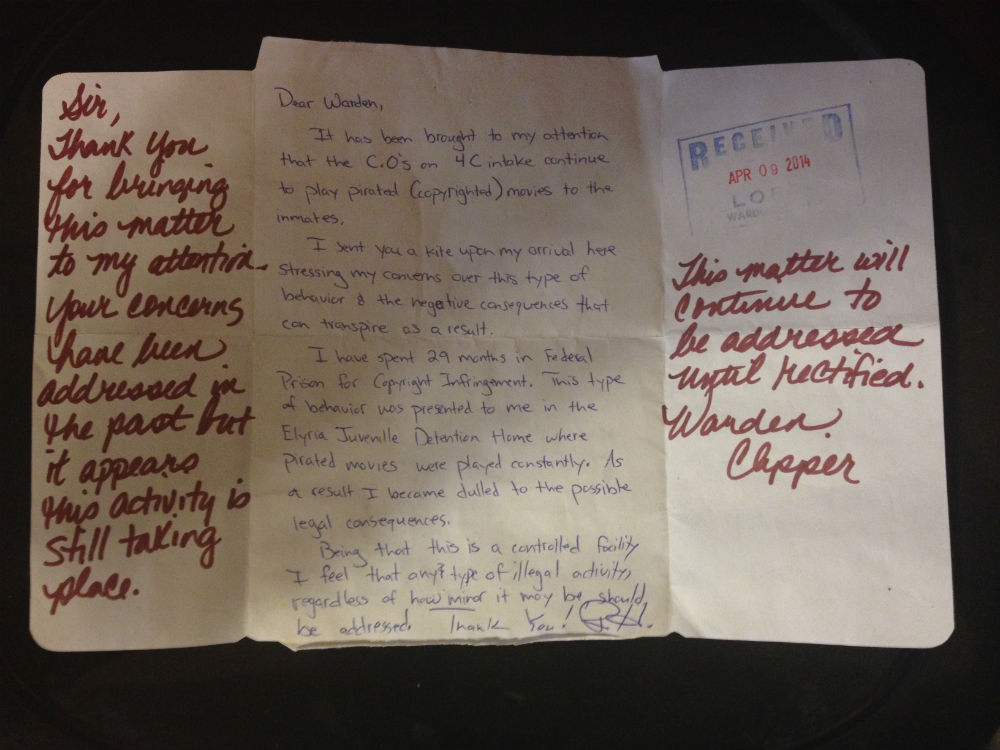 TorrentFreak got in touch with Mr. Humphrey who is baffled that prison staff are committing the same kinds of crimes some of their inmates have been convicted for. This isn’t exactly the correctional influence one would expect from these institutions, Humphrey says.

“If people are going to prison for copyright infringement, prison mind you, where they are supposed to be paying their debt to society and rehabilitate for their crimes? How is it that the prison itself is showing pirated movies?” Humphrey says.

“Why are people even being punished and sent to prison for rehabilitation when it’s clear that the system isn’t able to restrain itself from the same type of activity,” he adds.

After his release last week he contacted Warden Clipper again in a phone call to follow-up on the issue. She reiterated that the complaint is being taken seriously and that the matter is being looked into. Clipper couldn’t say, however, whether the officer responsible has been questioned about the issue.

TF contacted Lorain Correctional Institution for a comment on the allegations and a spokesperson informed us that the issue is still being investigated. Thus far, however, no pirated materials have been uncovered.

“Please note that this matter is still under investigation. Warden Clipper received two kites from this inmate both of which she took seriously. No contraband has been found pertaining to this matter and nothing can substantiate this inmate’s claim,” we were told.

“Due to Warden Clippers concern regarding copyrighted movies this investigation will remain ongoing. There have not been any other complaints from any other inmates or staff concerning this matter,” the spokesperson added.

Of course, other inmates are unlikely to complain about pirated movies, as they probably enjoy the free entertainment. For them it’s the only option to watch the latest blockbuster movies shortly after they premiere.

According to Humphrey, the Lorain Correctional Institution is not the only prison where pirated movies are shown to inmates. During his youth he was detained at Lorain County Juvenile Detention Center, where the same issues took place.

Looking back at his time there, Humphrey says this may have played a role in his fascination for piracy, which eventually led to him starting several pirate sites, and a subsequent 29 month stay in a federal prison.

According to Humphrey these probably aren’t isolated incidents that only occurred in these two institutions either. He believes that this is a broader issue apparent in all layers of society, prisons included.

Humphrey finally notes that the solution of the issue lies with the movie companies, not the infringers. He believes that the content producers should come up with affordable and good platforms so movie fans can watch their favorite movies in all formats as soon as they are released.

Until then, however, prisons should probably stay away from DVDrips, CAMs and Telesyncs.

A message from Humphrey