For many years YouTube was a haven for people to upload and distribute videos explaining how to get otherwise premium content for free.

Back in 2018 we predicted that the platform wouldn’t put up with this forever and soon enough, YouTube began clamping down on this type of content using its ‘harmful or dangerous’ content policies. YouTube’s restrictions are numerous and are especially clear when it comes to piracy-related tutorials.

This policy has teeth. YouTube says that a first breach will probably result in a warning but a ‘strike’ is also possible. Three strikes in 90 days mean a channel termination and there is no shortage of piracy-focused YouTubers that didn’t heed the warnings and have been banned from the service. Interestingly, seemingly innocent parties can get sucked in too.

With 223K subscribers and 12.7 million channel views, TechDoctorUK is known for his video tutorials. A couple of years ago, these included presentations on piracy apps such as Mobdro and Showbox but to avoid falling foul of YouTube’s content rules, these were all deleted and these days he says he only uploads tutorials for legal applications.

However, this shift doesn’t appear to be helping the YouTuber much. In numerous complaints directed to YouTube on Twitter, he explains that on at least five occasions YouTube has flagged his tutorials as breaching content guidelines, something which resulted in strikes against his account.

“I have received strikes for doing a review on Xumo TV, Pluto TV and others. All of which are completely legal. Fortunately, after tweeting TeamYoutube, they did remove the strikes,” he informs TF.

For example, the strike for the Pluto video was contested but YouTube stood by its stance that the video violated its guidelines. It took around four days to reverse the decision.

Another strike related to a video that showed how to use a Firestick backup manager. TechDoctorUK’s first appeal was rejected in two minutes but following a review, was later restored and the corresponding strike was removed.

However, after posting another review, this time covering an app called Teleboy, YouTube flagged his content as policy-violating yet again. 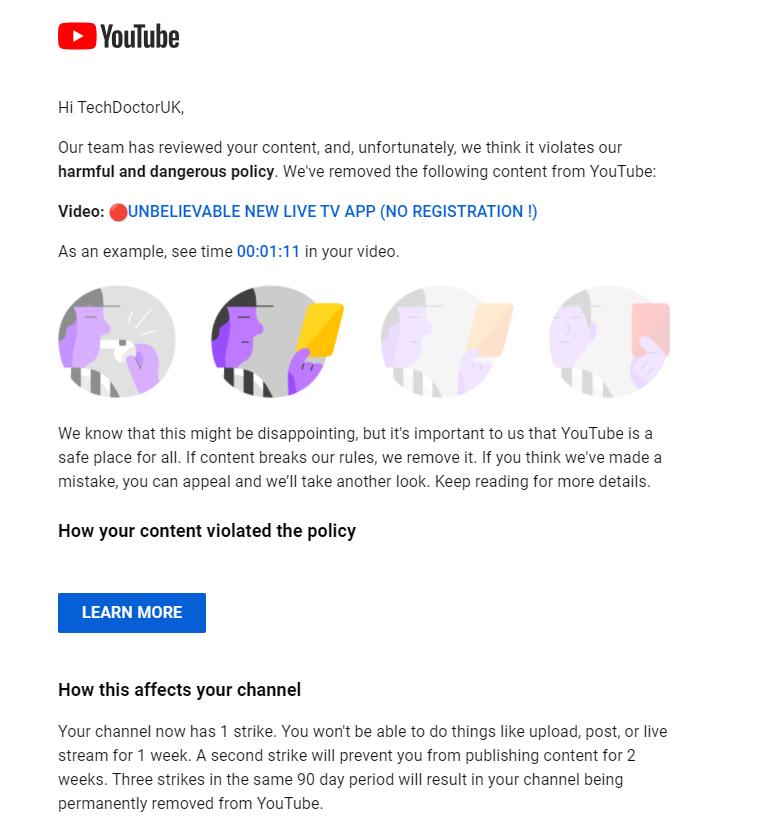 What’s of interest here is that the Teleboy app is distributed on Google Play and appears to be legitimate. Even if there were any red flags about the app itself, it’s still being distributed from there.

After complaining about this strike the objection was again rejected in two minutes (the video is eight minutes long) and TechDoctorUK still can’t get a response from YouTube or have his suspension removed. YouTube says that his content is still under review with the policy team.

We know this is important to you – our team is still looking into your video, and we’re waiting for the update from them. Note that our process can experience delays due to COVID-19’s impact on our workforce as we have less staff available. Appreciate your continued patience.

So what is the problem exactly? TechDoctorUK believes that YouTube’s automated scanning tools are to blame.

“The trouble is the automation bots don’t know if something is free in the first place,” TechDoctorUK informs TF.

“They just look/listen for keywords in your video and if they suspect it’s something related to free access, they just take down your video and give you a strike. Three strikes in the same 90 days and your channel is deleted.”

As the infringement warning from YouTube indicates a specific timestamp, it does appear that some scanning has taken place but why YouTube is flagging this type of content is unclear.

There’s a possibility that earlier (but now deleted content) covering various piracy apps could have placed the channel on the radar but this latest set of strikes suggest that the recognition system may need a tweak or two.