Founded in 2003, UK-based FileSoup was one of the original torrent sites. It outlived many of the sites that sprung up around the time and developed a great reputation and a warm community in the years that followed.

After years of operating the site without any noticeable trouble, in the summer of 2009 police and the Federation Against Copyright Theft (FACT) conducted a raid on the home address of the site’s owner, known online as ‘TheGeeker’. Another raid was carried out around the same time on the property of fellow administrator ‘Snookered’. Both were arrested and taken in for questioning.

From the information that we received after the raids it became clear that the MPAA-funded anti-piracy group FACT had been the driving force behind the case, and that they were responsible for gathering the intelligence that led up to the arrests.

Similar to other cases in the UK, such as that against TV Links, it was not the police but the private anti-piracy group FACT who took charge of property seized from the Filesoup operators. As it turned out, the police themselves knew very little about the suspects and their alleged crimes.

This became clear when Geeker was questioned by the police after his arrest last year. In common with other FACT-run cases, the nature of BitTorrent proved difficult for law enforcement to grasp, with Geeker having to explain how everything worked – including what URLs and domain names are.

Now, nearly a year later, Geeker and a fellow administrator Snookered have been charged with conspiracy to infringe copyright for their role in the site. Notably, Filesoup is mainly a discussion board and although torrent files are linked on the site, it hasn’t operated a tracker for half a decade.

The full text as it appears on the charge sheet is as follows:

Between the 1.1.2003 and 1.9.2009 Stephan […} and George […} conspired together with others unknown to infringe copyright in a work communicated to the public in the course of a business namely the website ‘Filesoup’ knowing or having reason to believe that copyright was infringed.

Both admins are currently out on bail but have to surrender to the custody of Taunton Deane Magistrates in Taunton, Somerset, during early August.

Geeker told TorrentFreak that he has been in contact with the same solicitors who successfully defended the admin of the OiNK BitTorrent site, who walked free earlier this year after a UK court cleared him of all charges. He can’t give out any more details on the case at the moment, but has promised to keep us updated as soon as he can.

Although OiNK and Filesoup are both BitTorrent sites, the charges are quite different. Instead of going for ‘conspiracy to defraud’ as with the case against OiNK admin Allan Ellis, the Filesoup operators are charged with copyright infringement offenses.

It appears that FACT has instructed the authorities to try a different approach this time around since Allan Ellis was not convicted. The most worrying part in this and other cases is that private anti-piracy organizations have so much control of the authorities, up to the point where they can keep seized goods in their possession.

Geeker is confident that he and his fellow admin have a strong case. He believes that, like Alan Ellis, he has never done anything wrong and hopes to convince the court of the same. To be continued. 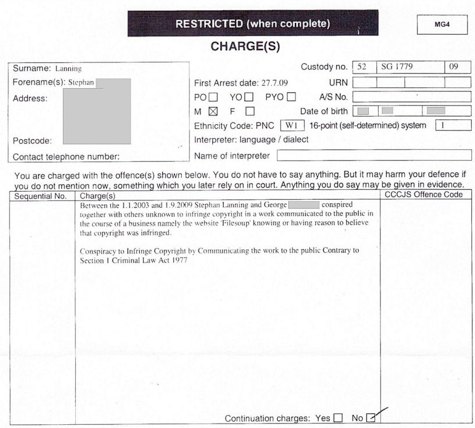