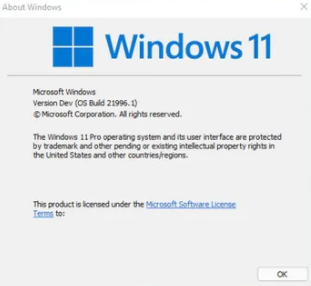 Earlier this week, a copy of the next version of Windows leaked onto the web.

Known officially as Windows 11, the leaked copy is a pre-beta version but that hasn’t stopped tech sites publishing mini reviews, assessing everything from its visual appearance to various technical features.

This early reveal isn’t what Microsoft had in mind so, with various ISO files now circulating on torrent sites, file-hosting platforms and even Google’s services, Microsoft has made a start at trying to remove the leak from the web.

A Slow Start to Public Takedowns

Ever since news of the leak broke on Tuesday we’ve been monitoring various resources for Microsoft takedown demands. Perhaps the biggest surprise thus far is that the US-based tech giant has been very slow off the mark with copyright complaints.

It’s possible that the company understands the futility of trying to prevent the spread, particularly since those that are most interested in the product won’t be easily deterred.

That being said, Microsoft has made some efforts nonetheless.

Thus far only a handful of DMCA notices have been filed with companies including Google and of course these are made available for scrutiny on the Lumen Database. Some of these have strange aspects for one reason or another, so we’ll detail a handful below.

The first takedown to catch our eye targets a Windows 11 ISO file stored on Google Drive. The service has been used repeatedly for distributing copies of Microsoft’s new OS in recent days and in this case, Google has indeed removed the file.

However, instead of listing itself as the source for the content, Microsoft informed Google that the original Windows 11 could be found on news site The Verge, listing the site’s article reporting on the leak as the source. 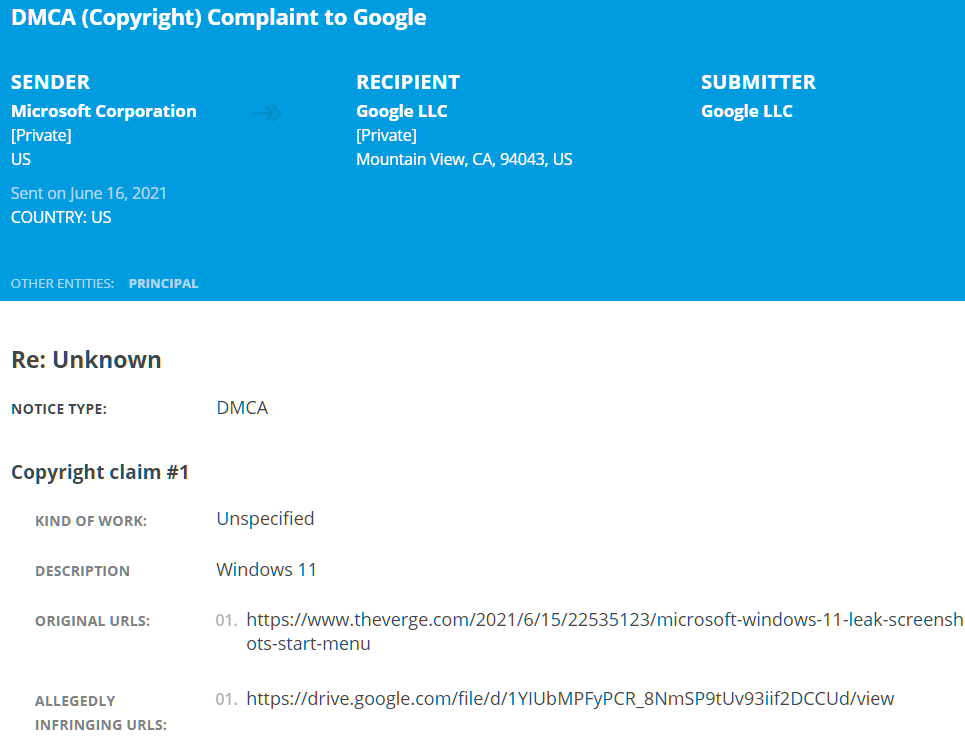 Another notice with strange features was sent to Google seeking to have two URLs removed from its indexes. In this case, law firm Covington & Burling LLP provided no source URLs on behalf of Microsoft but did take down a link to Twitter and indeed the original tweet.

Another link on Mediafire was taken down too but weirdly the file-hosting platform thinks that publishing company Springer Nature sent the DMCA notice, not Microsoft.

Review The Leak, Don’t Link To It

Microsoft in Japan also threw its hat into the ring, filing a DMCA notice against tech news site BeeBom.com. The site has published several articles about the Windows 11 leak, most of which didn’t raise any red flags.

However, in an article titled ‘How to Download and Install Windows 11 Right Now’, the news site made the decision to link to several Google Drive and HiDrive accounts hosting the leaked OS, which was a step too far for Microsoft.

“Beebom.com’s article is distributing Windows 11 ISO (copyrighted to Microsoft). Please remove their article from the search. It is a leaked copy of the unreleased Windows 11,” the notice reads.

After Google processed the delisting request the BeeBom article remained live for several hours. However, it appears that BeeBom may have been put under more direct pressure too since the entire article has since been deleted. The embedded Google Drive links no longer provide access to the Windows 11 ISO either, with Google returning: “Sorry, the file you have requested does not exist.”

While this action seems to indicate a start to the clean-up, the cat is already well and truly out of the bag.

The ISO is still available in dozens of other locations, including via many articles and posts appearing in the first few pages of Google’s search results. The file also appears on sites where Microsoft will have more trouble removing content but at least at the moment, the tech company doesn’t seem overly concerned by the spread.