For well over a decade, there’s been a clear distinction between public indexes and private trackers in the torrent community.

The first are open to anyone, and prominently visible in general search engines. The latter prefer to keep a lower profile, and often require users to maintain a healthy share ratio.

In recent weeks, an odd newcomer appeared online that is neither public nor private, according to the established definitions.

AlphaReign.se is a new site that allows users to find torrents gathered from BitTorrent’s ‘trackerless’ Distributed Hash Table, or DHT for short. While we have seen DHT search engines before, this one requires an account to gain access.

Private, in this case, is relative, as the operator has publicly shared an invite link that allows anyone to join. However, there is a good reason why this roadblock was put in place.

“The main reason is that if we have a login, we can keep torrents from being indexed by search engines and thus DMCA’d much less frequently. We can also block abusive users,” AlphaReign’s Prefinem tells TorrentFreak.

“While it does create a barrier to entry, we feel the increased control will help us last longer than traditional torrent search engines,” he adds. 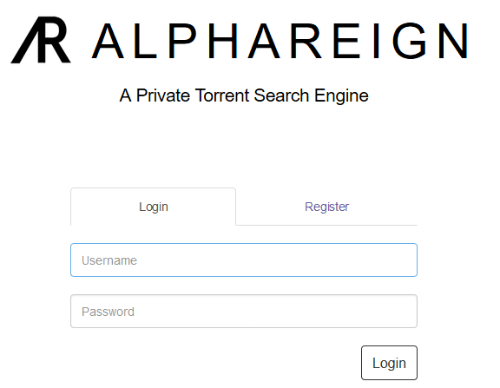 This is quite an interesting development. Most public torrent sites work very hard to be visible in regular torrent search engines in order to drive more traffic to the site. AlphaReign, however, appears to give priority to fending off takedown requests.

For the operator, the DHT search engine is a culmination of previous experiments. In the past, he coded more traditional torrent indexes that relied on trackers, but these often shut down.

“With the new AlphaReign, I wanted to build a search engine that didn’t rely on trackers since these can be taken offline,” Prefinem says.

Another advantage is that he no longer has to scrape torrents from external sites. Instead, he crawls the open DHT network for new content and adds this to his existing search index.

At the time of writing, AlphaReign lists 5.7 million public torrents. Aside from having to login, the site functions like a regular search engine, listing magnet links in the results instead of torrents.

The site’s operator notes that the site is still a work in progress, but thus far feedback on sites such as Reddit has been positive.

In the future, he hopes to expand AlphaReign with new software that allows users to search the DHT network on their own devices, with help from peers. Such a system would remain online, even if the website itself goes down.

“This is a long-term goal, but one I believe is necessary for torrents to stay alive. Think of it as like a Tor node, that passes DHT queries in-between all the nodes and each node runs an independent search engine that can be queried by anyone,” Prefinem explains.

Regular readers may notice that AlphaReign shows a lot of similarities with the defunct DHT search engine Strike. However, Prefinem assures us that it was developed from scratch. In fact, he had never even heard of Strike until this week.

It will be interesting to see how a private DHT search engine will perform in the long run and whether the operator will achieve his goals.

Update March 2017: AlphaReign shut down and released the code on GitHub.