We’ve covered all kinds of anti-piracy stories here on TorrentFreak, but what you are about to read has to rank up there as one of the most unusual. Even now we’re still scratching our heads and rubbing our chins.

At the end of May 2011 a leaked copy of Deus Ex: Human Revolution turned up online. As downloaders quickly discovered, it wasn’t the full game and was marked up on torrent sites as a ‘beta’ version. Nevertheless, a good time was being had by all.

However, what file-sharers didn’t know was that they were quietly being overlooked by a young anti-piracy outfit who had a most unorthodox plan up their collective sleeves. Founder of Vigilant Defender, James Grimshaw, who describes himself as “an illegal downloader” with connections to “the Scene”, told TorrentFreak that this particular leak of Deus Ex: HR gave his company the opportunity they’d been waiting for.

First, Vigilant obtained a copy of the leak and a crack that was made available from a Chinese file-sharing site known as ALI213. Using a combination of the pair and the addition of their own code, the company then re-uploaded their version of the release to various torrent sites, all mocked up to look like official releases from well-known piracy groups such as Skidrow and Reloaded. The modified beta was then distributed via rented seedboxes.

James told TorrentFreak that after the first couple of levels, gamers found themselves dumped out and directed to a website containing a questionnaire. It asked why people illegally download, which torrent and DDL sites they use, how much data they download per month, what content people download (with a focus on PC games) and what, if any, anonymity services they use.

A whole section of the questionnaire was dedicated to DRM systems such as SecuROM, Steam, and solutions from EA and Ubisoft. Vigilant also asked respondents if they were planning on buying the game when it came out officially and how much they would pay for it – the average (including nearly 24% of respondents who indicated they had already pre-ordered at the full price) was $28.00. 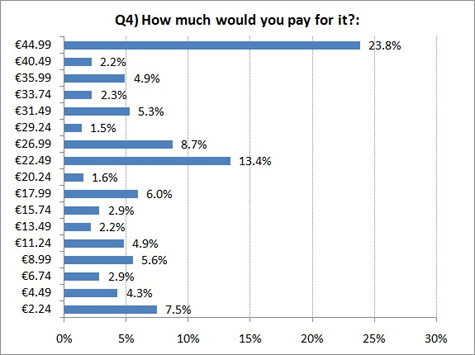 The whole point of the experiment, James says, was to get pirates to download a free trial of a game and then go on to buy the full product through a yet-to-be-created distribution system. He apologized for having to do that by tricking pirates into a ‘fake’ download and went out of his way to say that he wishes to embrace file-sharers, not treat them as enemies.

“Our intention was not to upset illegal downloaders, and we did hold back on the amount of images we created, uploaded, and to what sites we were on,” James told TorrentFreak.

“We love downloaders just as much as we love PC Games, but there has to come a time when you realize that the balance is no longer there, we just want to restore balance. Hopefully that will be enough to bring publishers back, to take more risks on the PC instead of shying away.”

Now, if an anti-piracy company admitting to seeding warez isn’t strange enough, consider this. James told TorrentFreak that while he has been speaking with games companies, none of them wanted to go first with an experiment. This means that Vigilant Defender were seeding leaked copies of Deus Ex: Human Revolution without the permission of developer Eidos Montreal or publisher Square Enix.

So, TorrentFreak asked, how do you think they’ll react when they find out?

“We believe that Square Enix and Eidos might be hurt, Eidos not so much,” James told us.

“But you have to remember that Square Enix is a business first and has a Japanese business culture. Thats how we will be approaching them, after they get over the hurt; we hope to make them understand that our experiment would not have affected their business. Until we owned up, no one knew what was happening!”

“But we do know that Square Enix, if approached correctly, could understand that illegal downloading is worse, and that in a different way we were trying to help.”

James says that the company was looking for a compromise between illegal downloaders and publishers, but red-tape was getting in the way.

“Sadly we were stuck in the water until a publisher gave us permission, while they liked the idea; they were leaving us hanging without an answer! We saw that if we didn’t take this chance, we might miss it altogether,” he explained.

“I think publishers are so upset with piracy of their media, that they believe nothing will ever work. But if you approach illegal downloaders, forgetting all transgressions, and tempting them as potential customer, it just might stand a good chance. We’d like to believe if you treat people as humans, they will do the right thing.”

When anti-piracy companies (and I’m not even sure that’s a good way to describe Vigilant Defender) try to do something innovative or daring to solve the piracy issue, that should be commended. However, the raw story behind this experiment was so complex we had to ask question after question and conduct hours of our own research. Even following that, some things still nag.

According to Vigilant Defender, between 22nd August and 12th September over 1 million people downloaded the ‘trial’ version of Deus Ex:HR resulting in 900,000 hits on the company’s questionnaire. However, TorrentFreak looked for live torrents relating to this release which might suggest this level of activity, but we were unsuccessful.

James says this is probably because the torrents have all been deleted having been discovered to be ‘fake’, but a million downloads is a hell of a lot and they must’ve stayed live for some time to achieve that. Furthermore, we expected to find comments on torrent sites at least mentioning the questionnaire, but we drew a blank there too. That doesn’t mean it didn’t happen, but we thought we should point that out. [See foot of article for update]

Furthermore, despite Vigilant Defender stating clearly that Eidos were not involved in their experiment, as reported on June 1st the games company clearly knew about the leak of the ‘beta’. Not only that, Eidos Community Manager Kyle Stallock was actually encouraging users to provide comments and feedback on it.

And we won’t even go into the several strangely coincidental emails we received from readers who wanted to know if there was any truth in the rumor that Skidrow had an agreement with Eidos not to crack Deus Ex: HR as soon as it came out. We laughed at the time, but quite unusually it did take Skidrow more than a month after the game’s release to deliver an official crack.

All in all this is a strange story from start to finish and what will come from it we just don’t know. If it was Vigilant Defender’s goal to attract the attention of games publishers, they have probably achieved that.

However, their overall goal, of monetizing the file-sharing space for PC games, is somewhat of a Holy Grail. If they can do that the whole world will listen, but at first view the model seems easily replicated. Any games developer can put a trial product out and then offer links to the full thing at a cheaper price. If they were prepared to do that, one might argue they would’ve done it already.

Update: Since publication Vigilant Defender have pointed TorrentFreak to some of the torrents they uploaded. Some have user comments which indicate that they were indeed directed to fill in a survey after the game ‘timed-out’.