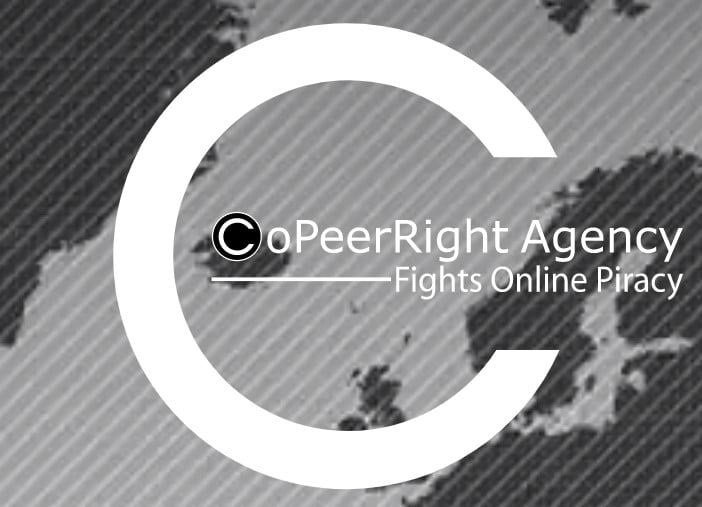 As a veteran in the anti-piracy business, the CoPeerRight Agency has witnessed many online piracy threats come and go.

When the company first started, LimeWire was the largest threat. This was later replaced by torrent sites, and today, pirate streaming and IPTV services are flourishing.

All these years, CoPeerRight has offered its clients a variety of anti-piracy tools. The company sends standard takedown notices to sites and platforms, but it also uploads trailers to steer people away from pirated content.

These promotional trailers can be seeded on torrent sites to sow confusion. However, the anti-piracy outfit also publishes trailers on legitimate streaming platforms such as Vimeo and YouTube. This helps to raise the profile of local film releases and can generate additional revenue.

The videos are all published with authorization from local distributors or rightsholders, but that doesn’t mean that there aren’t any issues.

Just a few days ago we noticed that the RIAA sent a takedown notice that targeted one of these ‘authorized’ movie trailers. Specifically, the Italian trailer for “The Dressmaker” movie. 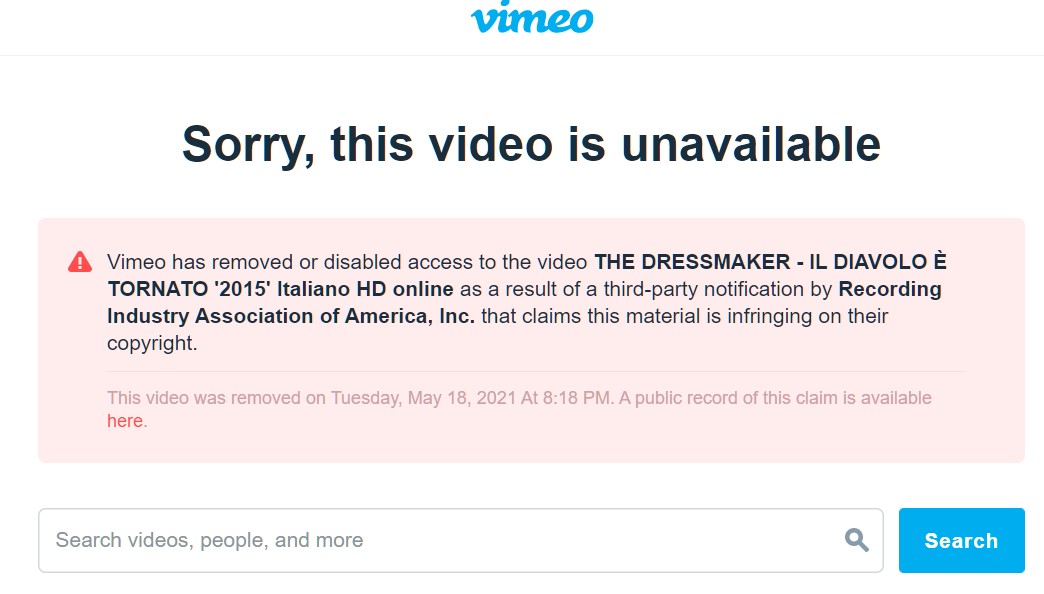 This RIAA represents music companies, so that alone makes it an odd takedown notice. In addition, CoPeerRight informed us that they have the right to distribute this video internationally. As such, the company believes that it should have never been removed from Vimeo.

“We were surprised to receive a strike for a trailer that we posted for marketing purposes with authorization of the rightsholder,” a CoPeerRight spokesperson informed us, adding that “this happens from time to time.”

With movie trailers, there are often dozens of rightsholders involved. This includes distributors around the world and the accompanying music may complicate matters even further.

“The Dressmaker” trailer included music from Universal Music, which is indeed an RIAA member. However, according to CoPeerRight, all the rights were properly cleared. The company swiftly sent a DMCA counternotice to Vimeo hoping to get it restored. 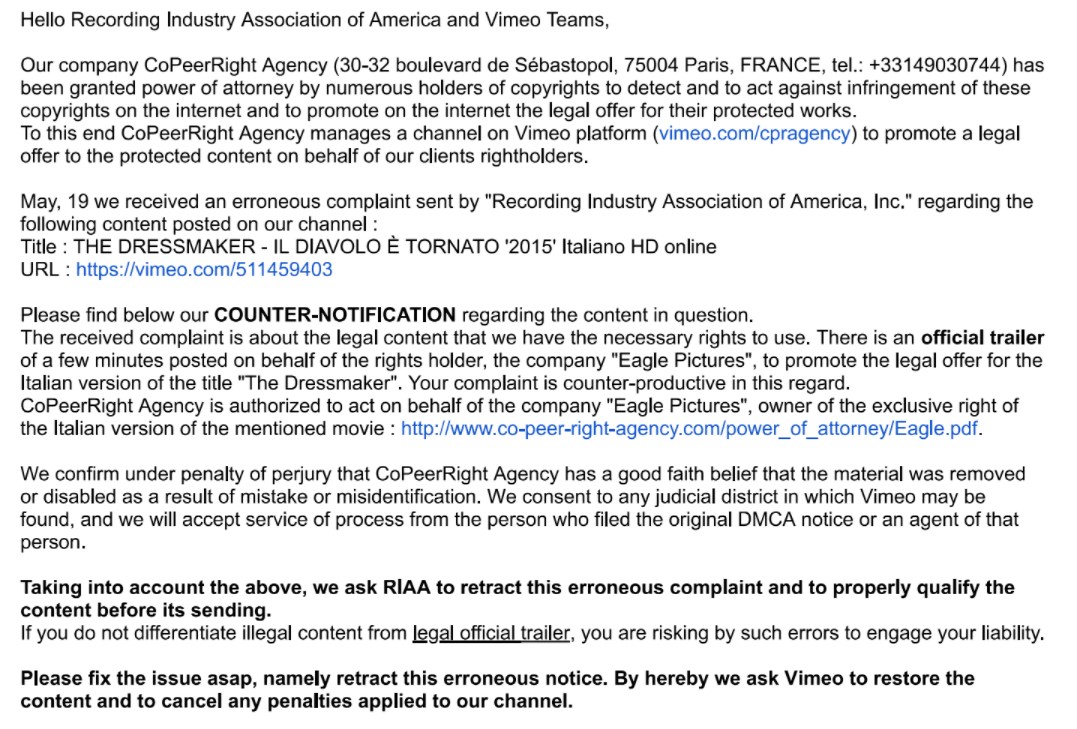 While one would expect that this matter would be resolved fairly quickly, the RIAA wasn’t eager to restore it immediately. The music group instead referred CoPeerRight to a representative from Universal Music, who never replied, and the trailer remained offline.

Earlier this week, it was finally restored. Under the DMCA, Vimeo is required to do so within 10 working days, unless the claiming party files a lawsuit. That didn’t happen. In fact, CoPeerRight heard nothing from Universal Music or the RIAA.

Not an Isolated Incident

At first, we assumed that this must be an isolated incident or a mere oversight. However, CoPeerRight says that, while RIAA mistakes are rare, takedowns from other anti-piracy groups are actually pretty common.

“Our clients’ promotional content is regularly deleted by anti-piracy companies. The main issue is a lack of manual verification,” the company explains.

To back up these claims, CoPeerRight shared a long list of videos that were flagged over the past several years. This put the company at risk of losing profitable promotion Vimeo and YouTube channels, some of which have over 100,000 subscribers. 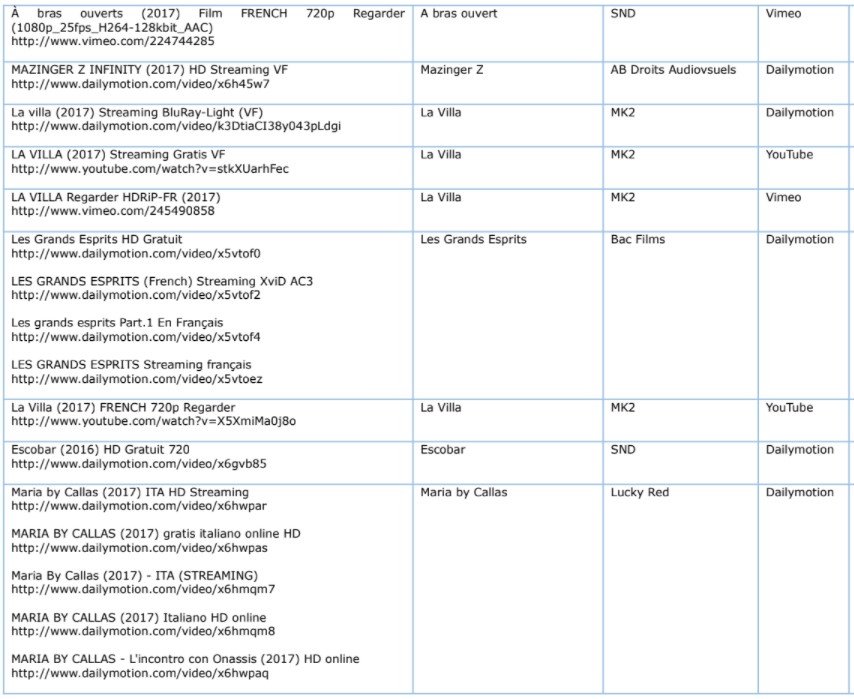 And that’s not all. The problem is even worse on torrent sites, where CoPeerRight also releases trailers. This is a tactic to steer people away from pirate releases but it’s also a magnet for takedown notices from rightsholders, which assume that it’s pirated content.

Over the years, other anti-piracy groups have removed numerous promotional torrents from Google’s search results.

“We stopped counting the notices from anti-piracy companies that remove Google search results. However, these takedown notices undermine our promotional campaigns on torrent trackers,” CoPeerRight informs us.

The French anti-piracy outfit regularly reaches out to colleagues to discuss these issues. This doesn’t always help but on occasion, it can bear fruit.

For example, some anti-piracy companies are relatively quick to retract inaccurate takedowns. In one email we’ve seen, one even offered to add the affected channel to a whitelist.

An email conversation with another anti-piracy company, which we shall leave unnamed, was less friendly. When CoPeerRight described that company’s notices as “fraudulent” it quickly escalated into a legal threat.

All in all, it is no surprise that mistakes happen. And when the volume is massive they will be more noticeable. Still, we didn’t expect that anti-piracy companies would regularly target each other’s content.

CoPeerRight stresses that RIAA’s takedown notice is quite rare. However, there are other anti-piracy vendors who are known to make the same mistakes over and over again.

Ideally, the anti-piracy company would like platforms such as Vimeo and YouTube to publish DMCA counternotices in the Lumen Database, similar to what they do with regular DMCA notices. That would make the process much more transparent.

“We take pride in carrying out legitimate copyright protection on the video platforms, but other vendors, under the guise of anti-piracy, have questionable practices. But I am sure you are already aware of that,” CoPeerRight concludes.