After the Jake Paul vs. Ben Askren fight took place in April, Triller fired off a $100m lawsuit targeting entities and individuals who allegedly streamed the event illegally online.

In the early stages, the lawsuit did not go to plan. Judge Percy Anderson wasn’t happy that 13 main yet separate defendants had been bundled into the same action, noting that the illegal conduct of one defendant could be wrongly attributed to another independent defendant.

As a result, every defendant except FilmDaily.com was culled from the suit, with Triller faced with having to file new lawsuits if it wanted to progress cases against other defendants. The company responded by suing the H3 Podcast and then last week filed three new lawsuits targeting the people behind Online2LiveStream.us and My-Sports.club, plus YouTuber ‘ItsLilBrandon’.

Yesterday, Triller added yet another fresh lawsuit to the collection, targeting the operator of another YouTube channel.

While all lawsuits are serious by their very nature, it’s hard to view the Eclipt Gaming YouTube channel in the same light as some of the other defendants in Triller’s litigation drive.

First of all, Eclipt is small. At the time of writing the YouTube channel has just 2,250 subscribers who mostly appear interested in the gaming videos on offer. Even then, these videos aren’t particularly popular. While a GTA Online video has 1,600 views, the vast majority of the others are lucky if they get a couple of hundred. This is definitely not a major piracy hub.

Nevertheless, the terminology used by Triller pulls no punches. Eclipt Gaming is described as a business entity founded around March 2018 and operated by an individual named as Matthew P. Space. Triller also throws in an additional 10 ‘Doe’ defendants for reasons that are not yet clear. The company goes on to allege copyright infringement, taking care to eliminate any attempt at a ‘fair use’ defense.

“[O]n or about April 19, 2021, Defendants, and each of them, unlawfully uploaded, distributed and publicly displayed, without authorization, and with no supplemental commentary or other attempt at transformation, the Broadcast to the users of the YouTube Channel, as a video entitled ‘Jake Paul Vs Ben Askren Full Fight + Highlights & Post Fight Interview,’ which was available at https://youtube.com/watch?v=YAfEWF4tdco,” the lawsuit reads.

Triller says it “promptly notified YouTube of the infringing content, and the aforementioned video is no longer available,” although the link does not return a YouTube copyright complaint notice.

As shown in the screenshot below, Triller visited the Eclipt Gaming channel after the fight was finished, something which is made clear by the inclusion of a post-fight interview in the allegedly infringing video. In common with Eclipt’s other videos the fight was lightly viewed, having been streamed just 297 times, although Triller expands that in its comments to the court. 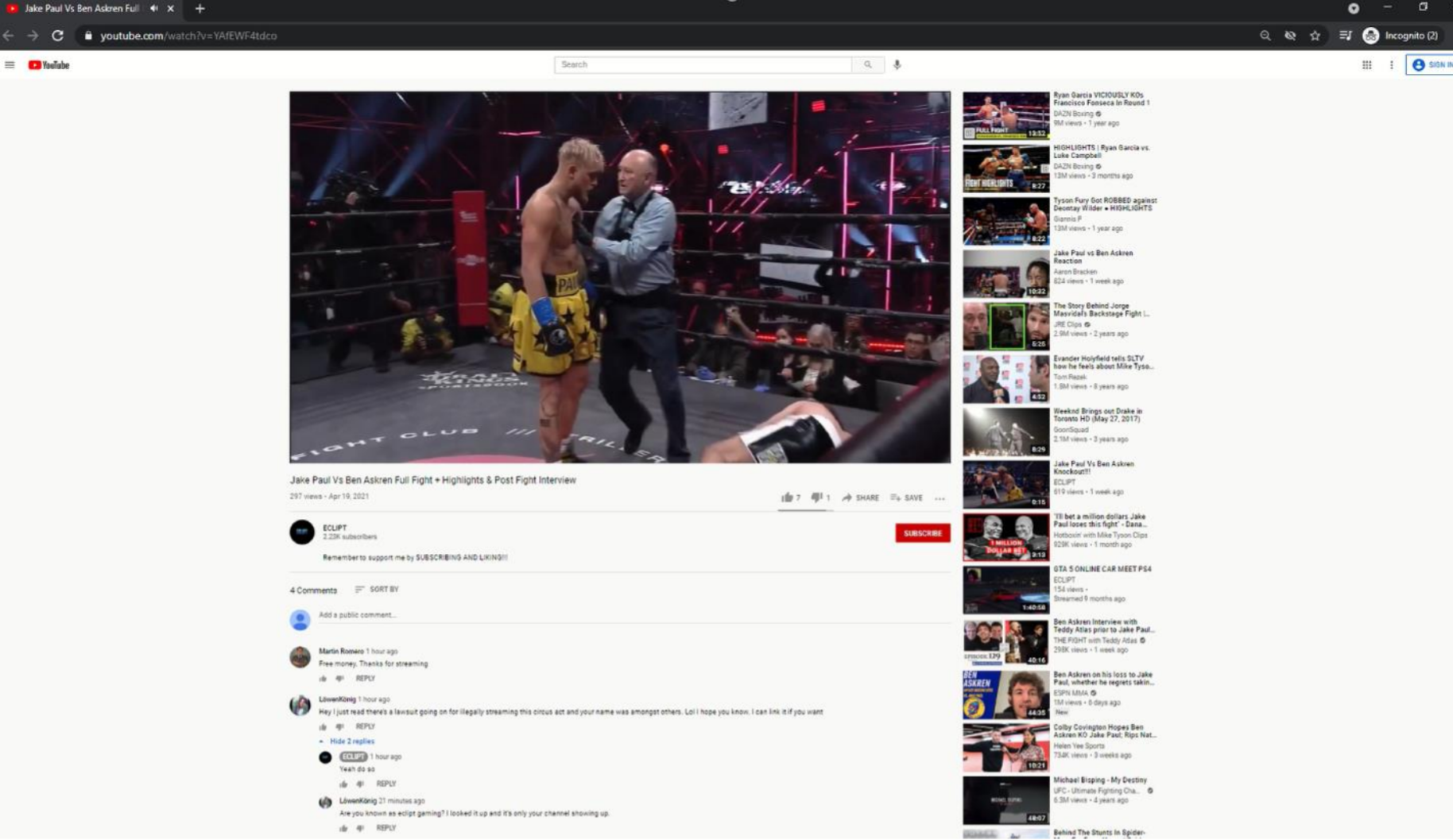 “Defendants’ calculated and reprehensible infringement, theft, and other unlawful acts — committed in knowing violation of the law — has resulted in damages suffered by Plaintiff by stealing and diverting at least 300 unique viewers of the illegal and unauthorized viewings of the Broadcast from Plaintiff,” Triller’s complaint reads.

In common with Triller’s other recently filed lawsuits, the company describes Eclipt in extremely elaborate terms, including claims that it acts as a “shell” for Matthew Space’s business interests that was “conceived, intended, and used by Space as a device to avoid liability and for the purpose of substituting an undercapitalized entity — namely, Eclipt — in the place of Space.”

It will be interesting to see what the court makes of that claim and various others that tread similar lines, including claims that Space and Eclipt commingled assets and engaged in unlawful business conduct in an effort to avoid liability to Triller. On first blush and based on the videos on offer, it seems unlikely that there were many assets to commingle, let alone in any particularly organized fashion.

As previously mentioned, the Judge dealing with the original $100m complaint was concerned that bundling many defendants into one suit could result in the illegal conduct of one defendant being wrongly attributed to another. Those concerns are now proving to be correct. The new batch of lawsuits, including the one filed against Eclipt, are all different. Indeed, most have a laundry list of offenses but for Eclipt, just three are listed.

For this Triller demands all profits made by the defendants and damages for its losses, in a sum to be determined at trial. At least in theory, these claims could reach tens of millions of dollars.

Alleging violations of the Federal Communications Act, Triller says that Space/Eclipt somehow “intercepted, received and/or descrambled Plaintiff’s satellite signal” in order to receive the fight and subsequently copied and distributed it via YouTube in exchange for “payments to aid, encourage, support, or otherwise endorse Defendants’ infringing conduct.”

For each offense (at least 300, according to Triller) the company demands up to $110,000, meaning that Eclipt/Space could, in theory, be on the hook for an additional tens of millions of dollars in damages. That’s a lot for someone who looks a lot like a teenager in his numerous gaming videos from just a couple of years ago.