For more than a decade researchers have been looking into the effects of online music piracy on the revenues of the record industry, with mixed results.

By now it’s clear that there’s no universal positive or negative effect of piracy on sales. The results depend on the type of artist, music genre and media, among other variables.

A newly published study by Jonathan Lee, researcher at Queen’s University Department of Economics, sheds an interesting light on these differences and unravels another piece of the puzzle.

In a working paper titled Purchase, Pirate, Publicize: The Effect of File Sharing on Album Sales, he examined the effect of BitTorrent piracy on both digital and physical music sales.

The goal of the study is to find out whether piracy’s sales displacement (piracy hurts sales) or the promotion component (piracy boosts sales) has a stronger effect.

“In theory, piracy could crowd out legitimate sales by building file sharing capacity, but could also increase sales through word-of-mouth,” Lee explains.

Drawing on a data set of 250,000 albums and 4.8 million downloads from a popular private BitTorrent tracker, he found some interesting effects. The overall results show a modest negative impact on album sales, as music industry executives would expect.

“From the results, I conclude that file sharing activity has a statistically significant but economically modest negative effect on legitimate music sales,” Lee writes.

Interestingly, however, this negative result is largely driven by physical sales. For many artists, piracy actually boosts digital sales, presumably because it serves as free advertising.

“This relationship varies by medium: file sharing decreases sales of physical copies but boosts sales of digital ones for top-tier artists, suggesting that the word-of-mouth effect is most relevant for the digital market.”

In addition, the popularity of the artists is an important factor too. More popular artists do relatively well as the boost in digital album sales compensates for the loss on the physical side.

“Top-tier artists lose sales, but the loss is partially offset by an increase in digital sales and the overall effect is small,” Lee writes.

Links between piracy and sales across various artists tiers 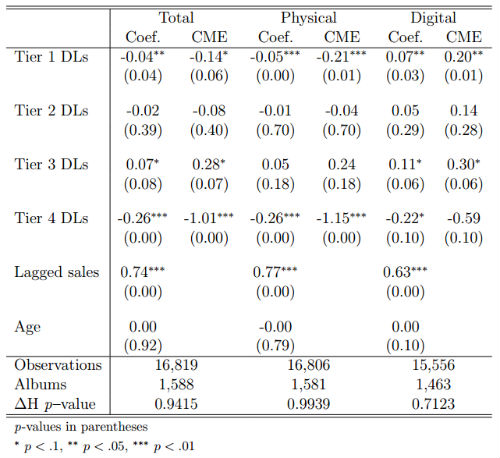 For their part, artists who are somewhat popular actually benefit from piracy while lesser knows musicians are hurt the most. The latter may be explained by the fact that these artists simply aren’t good enough for people to buy their work.

The study adds to the never-ending debate on the effect of piracy on sales. It’s a good illustration that file-sharing can have both a positive and a negative impact.

One of the downsides is that the data itself is relatively old, from 2008, and the music industry has changed a lot since then. This means that the results may have been different today.

Also, it’s worth noting that the download numbers come from a BitTorrent tracker that counts a relatively high share of music aficionados. They may also act differently than the general file-sharer.

That said, the paper offers a unique and unprecedented analysis of BitTorrent piracy on music sales. It clearly disputes the general argument that music piracy exclusively hurts album sales, and suggests that BitTorrent piracy can act as promotion under certain circumstances.