During the summer of 2008, iPhone developer Alec Renolds announced he was working on a BitTorrent application that would be capable of automatically downloading and installing iPhone applications. Provisionally named ‘AppDowner’, the project looked promising but faltered a little due to some personal issues.

Now things are back on track as Alec has teamed up with a new designer Miles Lorry to revitalize the newly and slightly renamed ‘appDowner’. Available in beta “soon”, appDowner will be compatible with iPhone 3.0 devices, so what’s the deal?

“The concept of appDowner has changed slightly, from being a simple ‘smart’ BitTorrent application to a full on App Store replacement,” explains Alec.

“No longer will you have to remember and type in the URL to your torrent file, simply click the “Store” tab on appDowner, and you’ll be brought to a beautiful interface designed by Miles (which isn’t quite ready to be shown off yet, but he assures us that it will be very, very soon!) which will allow you to search and find the apps you’re looking for.”

appDowner will be available soon 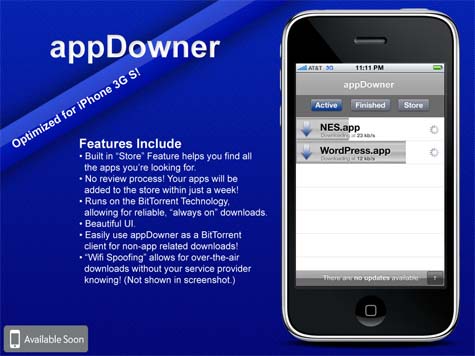 Unlike the official App Store, there will no iTunes-like approval process to get your own applications onto the appDowner store, with Alec promising that submissions to the system will be accepted within a week.

While BitTorrent is employed to serve apps to the user, the appDowner torrent client can also be used for non-appDowner downloads too

When released in beta, appDowner should become available via Cydia/Icy.