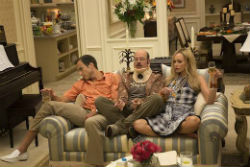 To reduce unauthorized downloading, content producers should make their products widely available and take away the incentive for people to pirate.

The above is an argument often heard in defense of piracy. In theory it makes sense, but when Netflix released the entire season of the revived cult series Arrested Development this Sunday, something strange happened.

Tens of thousands of pirates lined up to grab a copy from various torrent sites. Many came from the U.S. and other countries where people only have to sign up for a free Netflix account to watch the show.

TorrentFreak tracked the download numbers for the various episodes and season bundles and found some interesting results.

During the first two days, episode one of Arrested Development topped 175,000 downloads on public BitTorrent trackers. A decent number, but one that pales in comparison to records set by Game of Thrones and other hit series.

Unfortunately the download figures by themselves are meaningless without context, so it’s hard to draw conclusions on how the Netflix release affected them. From past experience, however, it is safe to say that the numbers would be significantly higher if a show had been released on a premium cable network.

After all, in countries where Netflix is available people have little reason to pirate the show. Or do they?

Looking at a sample of the geographical locations of the pirates we see that the United States comes out on top with 18%. Other countries where Netflix is available, such as Canada (11.8%), United Kingdom (5.6%) and Sweden (3.5%) are also high on the list. In fact, Australia is the only non-Netflix country in the top five.

While it’s easy to conclude that this proves that these “pirates” are just cheap thieves, the reality is a bit more complicated. For one, it could be that the download numbers would have been exponentially higher if Arrested Development hadn’t been made so widely available.

On the other hand, it also appears that not all of those who choose to pirate Arrested Development do so because they are unwilling to pay for a Netflix subscription.

Looking at the comment section of a popular TV-tracker there are plenty of comments on the issue. One downloader comes in with the stereotypical response, saying that he just “wasted” $8 on a Netflix subscription. However, there are many who disagree with this view.

“I certainly don’t see it as wasted. I’m fully supportive of Netflix for what they are trying to achieve. They’ll have my $8 regardless of whether I use it or not.”

“You didn’t waste $8, you proved that Arrested Development was worth funding for a fourth season. And you got to see it slightly sooner, which is totally worth it.”

The above comments are among many suggesting that even those who have a Netflix subscription may still download the episodes through BitTorrent sites.

In part this is out of habit as that is how many people have enjoyed TV-shows for many years. The comment below from a Swedish downloader shows that pirate habits are sometimes fueled by unusual situations.

“I have a Swedish Netflix account, but for some stupid reason the PS3 app won’t let me turn the subtitles off. I can choose between Swedish, Finnish etc subtitles but there’s no option to turn them off completely. So here I am downloading the episodes, even though I have Netflix, just to watch without subtitles.”

Of course there are also many downloaders who turn to unauthorized sources because Netflix is not available in their country, as is the case in Australia, which has the highest piracy rate per capita.

In an open letter, the Australian consumer advocacy organization Choice recently asked Netflix to open up shop down under, so Aussie fans can watch their shows legally. Netflix is receptive to these comments and told PaidContent that it’s “busily expanding” into new markets.

According to one commenter on a torrent site, the potential for new customers is certainly there.

The above lays out some of the challenges faced today by TV-producers old and new. There is a huge demand for TV content but at the same time people’s viewing habits are rapidly changing.

All in all Netflix has to be applauded for their efforts to innovate. The lack of windowing and on-demand availability will certainly have an impact on piracy rates, although it may take a while for some to convert, even those who already pay for Netflix.

If the conditions are right, however, old patterns will eventually change.