A few days ago the piracy research firm Envisional published an elaborate study into (unlawful) file-sharing traffic on the Internet. Commissioned by NBC Universal the researchers combined older Internet traffic estimates with their own research on the use of various file-sharing platforms.

Although we’ve been quite critical of such studies in the past, especially when they’re funded by the entertainment industry, we have to admit that this is one of the best reports we’ve seen to date. Those who are interested in the use of BitTorrent and how it compares to other file-sharing services should definitely have a read.

The researchers clearly know what BitTorrent is all about, and although several assumptions and methodological choices paint the outcome to a certain degree, there’s not much to complain about in the data they present. Unfortunately, however, even solid data can be easily misinterpreted in the press.

Over the last days several readers have pointed us to an article that appeared in two of the top tech news outlets, Wired and Ars Technica. The article – “Where have all the music pirates gone?” – is written by one of the best tech reporters we know, but in this case the conclusion is way off.

The article zooms in on Envisional’s breakdown of content types that are “most popular” among BitTorrent downloaders. For this analysis the Envisional researchers looked at the 10,000 most downloaded files on the PublicBitTorrent tracker in December 2010.

As it turns out, pornography and films are in the lead with 35.8 and 35.2 percent respectively. Music on the other hand can be found at the bottom of the list with a measly 2.9 percent. Sounds plausible so far, but the article failed to mention something that clearly affects the outcome. 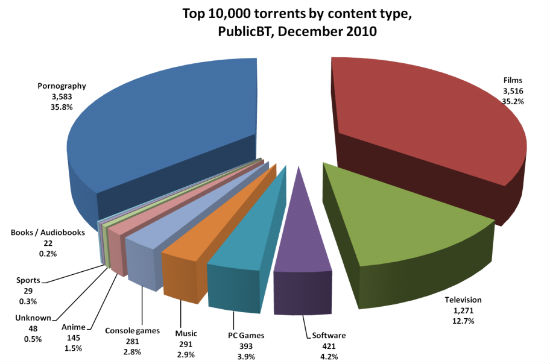 Larger file sizes mean longer download times, and this is one of the explanations why there are far less music files in the top 10,000. Movie torrent simply take longer to complete so there are generally more people listed as leechers. If the top 10,000 was based on actual completed downloads the percentage of music torrents would have been much higher.

We’re of course not arguing that more people download music on BitTorrent than movies, but based on the above it seems likely that the difference between the two categories in “actual” popularity (completed downloads in a given time) is being misrepresented. One thing’s certain, the music pirates have definitely not vanished from BitTorrent yet.

The original article does point out correctly that worldwide, the music industry is doing a much better job at presenting alternatives to piracy than the movie industry. Whether music piracy has gone down because of it is a different question though, and one that at least needs some comparison data in order to be answered correctly.