For the past several years, the music industry has championed the need for a 3 strikes-style regime in order to combat illicit file-sharing. The idea is that when someone is monitored illegally sharing files, they are sent a warning letter via their ISP. On receipt of a third such warning the recipient will find his connection to the Internet temporarily severed.

On April 1st 2009, South Korea took a step into the unknown by passing legislation to begin such a regime. By July 2009, warnings were being delivered to users via their ISPs and now, thanks to work by Heesob Nam, the results of the first 6 months of the scheme are available, as shown in the table below: 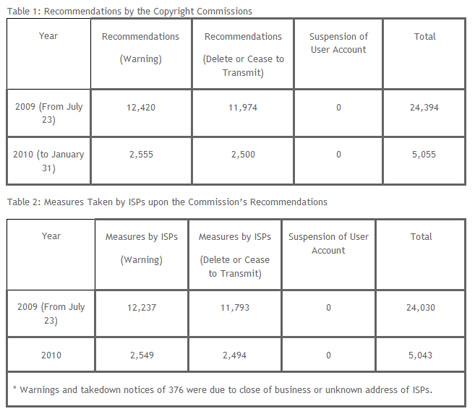 Interestingly, ‘Suspension of User Account’ – the 3rd strike – hasn’t been used at all in any case. So, while on one side people will argue that a 3 strikes regime was never necessary, others in the music industry will no doubt frame it differently – that the threat was necessary to force compliance and has been proven to be 100% effective. Whether that trend continued for the rest of 2010 remains to be seen.

However, a unique aspect of the South Korean implementation of 3 strikes is that it applies to websites too. If found to be continually hosting infringing content, either as reported by copyright holders or at the discretion of the government, sites run the risk of being shut down by the authorities.

It is of great interest, then, that while the above figures show zero disconnections for the the first 7 months of the scheme, the same will not be true when March 2011’s figures are reported.

The South Korean authorities have just announced they have conducted a major crackdown on some of the country’s top cyberlocker/file-hosting services.

According to the Ministry of Culture, 19 “die-hard” sites were targeted in the operation which was carried out by dozens of investigators over the past several days.

Together the sites are reported to have served between 2 million and 4 million users, and in common with pending cases in the United States, prosecutors in South Korea claim that the sites encouraged those users to upload infringing material.

So far around 1000 TB of data has been seized and the prosecutors say work is now underway to identify the heaviest uploaders. Since South Korea’s 3 strikes law allows action to be taken against those who continually upload infringing content even to file-hosting sites, Internet suspensions could be on the way.