Australia has been struggling to find an adequate response to online piracy for several years, but progress has been slow.

While pirate site blockades are in effect now, an earlier plan to implement a three-strikes anti-piracy regime failed.

Despite this setback, Australian legislators are still determined to tackle widespread copyright infringement. The most recent effort comes through an overhaul of the country’s copyright regulations, with a new proposal (pdf) to adopt a voluntary anti-piracy code.

The code would apply to carriage service providers, including Internet providers, to agree on a joint anti-piracy strategy. The voluntary code should be supported by “broad consensus” and include technical measures that are “used to protect and identify copyright material.”

The proposal further stresses that the anti-piracy measures should be “non-discriminatory.” They also shouldn’t impose “substantial costs” on the service providers or “substantial burdens on their systems or networks.” 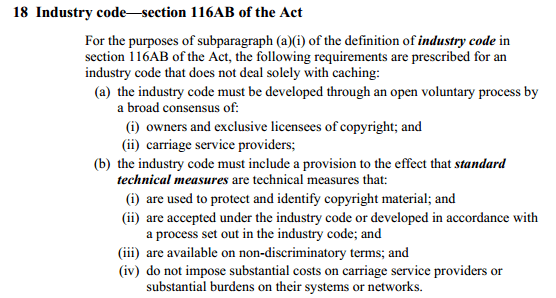 The description of the code is quite broad can include a wide variety of measures, including a new iteration of the “strikes” scheme where copyright holders report copyright infringements. A website blocking agreement, which avoids costly court procedures, also belongs to the options.

An accompanying consultation paper published by the Government stresses that any monitoring measures to track infringements should not interfere with the technology used at the originating sites, ZDNet notes.

While the Government pushes copyright holders and ISPs to come to a voluntary agreement, the failed “three strikes” negotiations suggest that this will be easier said than done.

At the time, the Australasian Music Publishers Association (AMPAL) noted that merely warning users did not go far enough. Instead, they recommended a system where ISPs themselves would implement monitoring and filtering technology to stop piracy.

It appears, however, that extensive monitoring and filtering on the ISPs’ networks goes beyond the scope of the proposed regulations. After all, that would be quite costly and place a significant burden on the ISPs.

The proposed regulations are not limited to the anti-piracy code but also specify how Internet providers should process takedown notices, among other things.

Before any changes are implemented or negotiations begin, the Government is first inviting various stakeholders to share their views. While it doesn’t intend to change the main outline, the Government welcomes suggestions to simplify the current proposal where possible.