Australian Piracy Rates Drop, But So Does Spending

For years on end, entertainment industry insiders have regularly portrayed Australia as a piracy-ridden country.

To see if this is indeed the case, the Government conducts annual consumer surveys to study local piracy habits. In recent years, this has revealed a steady decline in piracy.

The latest online copyright infringement report, released by the Department of Communications and the Arts this week, suggests that there’s been a steady decrease in the number of people who consume music, movies, and TV shows illegally. This follows the trend that was revealed in earlier reports.

According to the Government, 16% of the population can be classified as pirates. This is a drastic drop compared to last year when a similar study found that 32% were pirates. In 2015, when the first survey was taken, the number was even higher at 43%.

These are indeed impressive numbers. However, this doesn’t translate directly to more revenue for the entertainment industries. In fact, in many cases revenue appears to be down, based on the survey data.

For example, the total spend on music dropped from $88.34 in 2018 to $70.01 in 2019. This is the lowest amount since 2015 when the survey started. The drop is mostly caused by fewer concert and merchandise sales as well as physical music purchases. 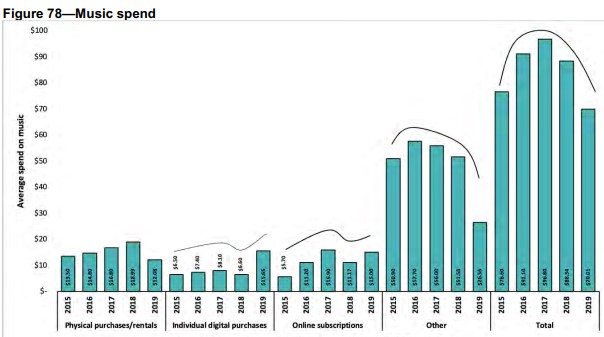 Although piracy has seemingly plummeted, the percentage of Australians who spend money on music remains unchanged at 46%.

A similar decline in revenue is visible for games and movies. For both categories, consumers spend less than in previous years, despite the dropping piracy rates. The only category where spending is up is TV, which saw a big spike in 2019, as shown below.

If anything, the survey makes it clear that less piracy doesn’t automatically translate to higher spending. In fact, those who pirate and buy tend to spend much more on average, compared to those who only purchase content 100% legally.

The report found that people who consume everything legally spend $42 on average per three months. Their counterparts, who pirate and buy, spend more than twice as much, $84. in the same period.

This finding is consistent with previous research indicating that “hybrid” consumers (who pirate and buy) are bringing in the most money, probably because they are the most content-hungry consumers.

Another noteworthy finding deals with pirate site blockades, which are increasingly ordered by Australian courts. These are meant to decrease piracy, which the report appears to back up.

Of all respondents, only 7% say they will bypass a blocked site if they encounter one. The vast majority, 58%, will simply give up. This suggests that pirate site blocking is extremely effective, but is it?

Looking closer at the data we see that the 7% number comes from the entire survey. This means that the responses also include the answers from the 84% who don’t pirate to begin with. These people obviously have no intention to circumvent the blockades.

Finally, the report shows that those who say they will circumvent blockades see VPN services as the ideal tool. Of all respondents, 44% mentioned VPNs, which is up from 30% last year.

A copy of the consumer survey on online copyright infringement 2019 is available on the Department of Communications and the Arts website.