Some people might remember Nexicon from the Getamnesty site we mentioned in the past, or perhaps as the Youtube copyright cops. The company has a history as a cigarette retailer but went on to hunt pirates after they were sued for selling smokes to minors and failing to report their sales to the tax office.

After its transformation into a pirate tracking outfit Nexicon launched its Getamnesty program which offers copyright holders a chance to turn piracy into profit. They cleverly circumvent privacy protection laws by using ISPs to forward settlement requests for various copyright holders to alleged infringers. One of their most successful partner programs is the Payartists website which is a misleading name to say the least.

The money collected through Payartists is not going to any artists at all. The only artist they collect ‘settlements’ for on the site is Frank Zappa, and he passed away in 1993. All the settlement money collected now goes to The Zappa Family Trust which is headed by Zappa’s widow.

The process is simple. Their software monitors BitTorrent swarms and other filesharing networks and records the IP-addresses of those people who share the work of their clients. It then automatically sends an email to the ISP linked to the IP-address with a request to forward it to the associated customer.

Thus far, this is very similar to the warning letters that the movie and music studios have been sending out for years. However, there is one big difference. The emails sent out by Nexicon to alleged infringers contain veiled threats of legal action if they don’t choose to settle within 10 days.

In their email they write that “it may be beneficial to settle this matter without the need of costly and time-consuming litigation.”

If you don’t settle they are “prepared to pursue every available remedy including damages, recovery of attorney’s fees, costs and any and all other claims that may be available to it in a lawsuit filed against you.” To make it even more scary, they point out that ISPs might cut your Internet connection if you don’t comply.

In the FAQ on the VPA website it is noted that consulting a lawyers is an option, but it would be a rather silly thing to do since it will cost more than the settlement itself. “It is likely that the cost incurred to retain a lawyer will exceed the settlement amount offered.”

Indeed, the settlements are rather cheap compared to the fine that was handed out to Jammie Thomas recently. The settlement offer for an adult movie is close to the retail price of a DVD and for a single Frank Zappa track you’ll pay $10. In comparison, Jammie Thomas was ordered to pay $80,000 per song.

Settle with Zappa on Payartists, or else… 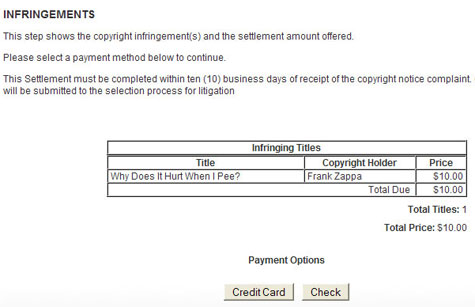 However, because of these low fees and the use of threatening language we cannot help mentioning the word ‘extortion’ once more. Even if they handle with the best intentions they should adjust their tracking software to be more accurate. We confirmed at least one case where they sent a settlement offer to the wrong person, and we’re pretty sure that this is not the only mistake they’ve made (here‘s another one).

Unsurprisingly, very little happens when the threats are ignored. A Manhattan College employee dealing with DMCA notices wrote recently. “We have not passed the settlement info on to the students linked with the allegedly infringing IP address and have not had any follow up notices from them.”

This aside, we are not aware of any legal action taken by any of Nexicon’s partners to back up their threats. To the best of our knowledge they don’t even have a proper license to act as private investigators which is a felony in several US states and renders the ‘evidence’ they have in their spreadsheets useless.

Our advice, if you get a settlement offer from one of Nexicon’s partners please forward it to your spam folder – after forwarding it to us first of course.