The Internet Defense League (IDL) launches today, looking to formalise the action that made such a statement 6 months ago. Until recently, protests tended to be single-site activities, but opposition to SOPA and PIPA was so widespread that it dominated the news that day, and had an unprecedented impact on the political situation.

The intertwining between the US Government and the Entertainment lobbies are legendary and getting worse. From former Senator Chris Dodd becoming the head of the MPAA, to RIAA lawyers taking top spots at the Department of Justice, as well as judicial positions. Now they’re getting into acting as well, as Senate Judiciary Committee Chairman Patrick Leahy (D-VT) illustrates with a cameo role in the latest Batman film. While actors have become politicians (such as Reagan and Schwarzenegger) it’s not often that serving politicians take time to act. Can you say “Holy Conflict of Interest”? Demand Progress certainly can.

But the Batman metaphor can go both ways, and leads the way for the aforementioned IDL launch. At launch parties in New York City, San Francisco, and Washington D.C. (at present) spotlights will send a message to lawmakers like Commissioner Gordon did, but to alert supporters rather than Batman. 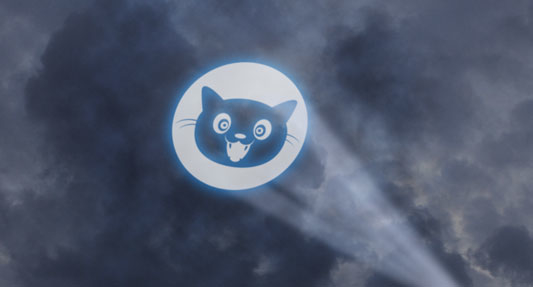 The laughing cat symbol (or “cat signal”) is the central logo in the IDL campaign, and will soon be found on websites all over the net, proudly displayed by IDL members. Membership is available to all, and current members include Reddit, WordPress, Mozilla, the EFF, Boing Boing and more (and it goes without saying that TorrentFreak is a member as well)

“I am excited to see the future of the Internet be a bright and awesome one” said Reddit founder Alexis Ohanian, “but we cannot afford to just talk about action, we must act to protect the free and vibrant Internet— which is precisely what IDL will enable Internet users to do.”

“From today onward,” said IDL and Fight for the Future founder Tiffiniy Cheng, “if there’s another terrible bill that would hurt the internet, we’ll all be ready.”

The trick for the IDL to pull off will be to keep interest and interaction going, without overuse, leading to apathy and becoming ‘routine’; or failing to act, leading to being forgotten and side-lined.

Yet even if it ends up being a failure, the precedent set by the January protest will echo in politicians minds for a while yet. It has already been emulated in Russia, where Wikipedia went dark in protest of a draft censorship bill supported by all four party factions, and will undoubtedly be repeated elsewhere soon. The line in the sand has been drawn though, will they dare to cross it.