Odex Pt. Ltd is a Singapore-based company that distributes anime in South East Asia. Created in 1998 it started distributing anime in 2000, later with titles such as Bleach, Fullmetal Alchemist, Mobile Suit Gundam and Chrono Crusade.

In 2007 a decision was made in the company to start targeting people who share their material via BitTorrent after they claimed their sales had dropped 60-70 percent in just 2 years. After using a tracking system to collect the IP addresses of sharers, they have successfully forced StarHub – an internet service provider – to reveal the identities of 1000 BitTorrent users they accuse of breaching their copyrights. It had previously forced the ISP SingNet to reveal its customers details.

In all fairness, StarHub did put up a fight to keep the privacy of its users but it was little use. According to StarHub spokesman Michael Sim, although the company originally said they had “an obligation to protect our customers’ information”, the pressure from the courts was too great. A court order against StarHub was obtained in a closed chamber session in the Subordinate Court which forces them to hand over their customer’s details.

“In the instance of Odex,” said Sim, “they have satisfied the court of their need for the information. As such, we will comply with the court order”

The next step for Odex is a familiar one to file-sharers: they will use the list of names that StarHub supplies to send them threatening letters(pdf) declaring that they’ve been caught sharing anime, such as the hugely popular ‘Bleach’, and that the only alternative to being dragged through the courts, is to pay a $3000-plus ‘fine’. Not that they’ll have much time to think about the next step – Odex gives around 9 days for a response before it threatens legal action.

Interestingly, Stephen Sing is also a director of the AVPAS – Anti Video Piracy Association of Singapore and has become very, very unpopular. Just after the Odex anti-BitTorrent campaign began, Mr Sing made the mistake of using an online forum to joke about how many sharers he was taking action against, and the guys over at HardwareZone caught him at it, via their dedicated (Official) Anti-Odex Club. 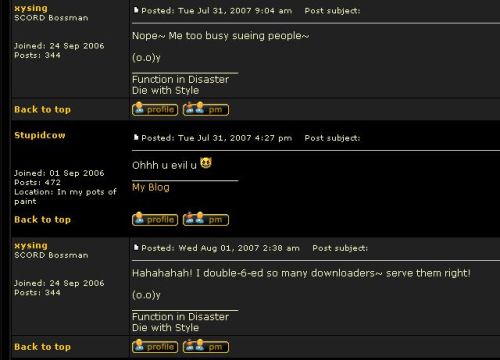 Mr Sing has been dubbed ‘the most hated main in Singapore’s anime community’, with anime fans putting up his photographs and personal information onto the internet, making wanted posters of him, posting pictures of his wife on the internet, threatening him with violence and promising to set fire to his house. At this point, Sing called in the police.

Next ISP on the Odex hit-list is Pacific Internet – if they win, that’s another 1000 BitTorrent users about to get threatening letters and demands for $3000 – thats 3000 users in total.

Should everyone pay up, Odex stands to collect a massive $9 million. No wonder the death-threats didn’t deter Mr Sing.