As the file-sharing phenomenon continues unabated, more and more outfits are taking the opportunity to milk this cash-cow. Unfortunately, there are a growing number that operate in a legal gray area and/or prey on the likelihood that they will receive few complaints.

One business model in operation for some time now is the selling of otherwise free software to unsuspecting entrants to file-sharing and P2P. Unaware that everything they need can be legitimately acquired for free, they hand over payments for access to public sites such as Mininova or The Pirate Bay. Equally, they end up paying for uTorrent or other P2P clients via credit card or other methods.

Recently there has been an increase in sites offering these type of services, but utilizing premium rate SMS to collect revenue. One such site being complained about right now is Bittorrent-net.info. The site offers downloads of most of the popular P2P clients including uTorrent, Vuze/Azureus, LimeWire, eMule and Ares.

However, the downloads have a sting in the tail. Once downloaded and the installer is run, the software package requires the user to SMS a provided number via cellphone to get codes to ‘activate’ the software. The site has sections for users around the world, but for UK users this sequence of events ends up costing individuals around £9 in call charges. Spot the deliberately obscure gray-on-gray prices in the screenshot below, written in letters instead of numbers so they don’t attract the eye. 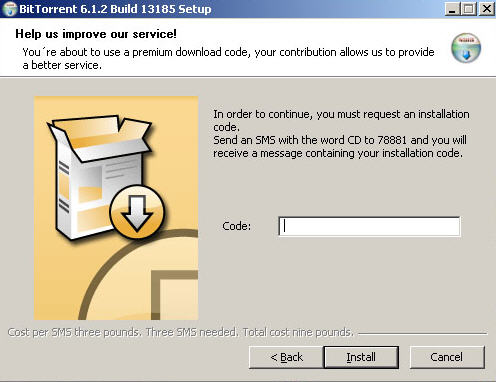 On closer inspection of the rarely viewed ‘Legal Terms‘ section of the site which is buried away in the usual legalese, it does indeed say that that the ‘service’ will cost £9. Unfortunately for the site this just isn’t enough to give it legality under regulations just introduced in the UK.

Under new rules from premium-rate phone regulator PhonepayPlus, hiding away charges as BitTorrent-net.info has done is strictly disallowed. In effect now is this rule:

Clearer pricing – No matter where you see a mobile phone-paid service advertised (whether it’s in a magazine or newspaper, on TV, on the internet or somewhere else), the pricing of the service must be given just as much space and attention as the rest of the advert – the cost shouldn’t be hidden in small print. Also, providers must not say a service or download is ‘free’ unless there really are no other costs involved.

The number that people have to SMS to obtain ‘activation codes’ is 78881, which is currently operated by mBlox Ltd. Touting itself as “The world’s largest mobile transaction network” and the company behind delivering the ‘Crazy Frog’ ringtone, mBlox does not provide the content or schemes behind such SMS’s, merely the infrastructure.

In a response to rising complaints as outlined in this article, mBlox provides an online tool to find the companies behind these numbers. Unfortunately our searches using this method drew a blank, but two company names kept cropping up linked to these operations – Netlink Network Corp. and Panama-based Soletto Group SA.

TorrentFreak’s calls for comment from mBlox have so far gone unanswered but we did managed to discuss the situation with SMS regulator PhonepayPlus, who gave us this statement:

Following intervention from PhonepayPlus, as a result of public complaints and its own internal monitoring, this service has been suspended from operation. Readers [in the UK] affected by this service should contact PhonepayPlus on 0800 500 212 (Mon-Fri, 8am-6pm), or at www.phonepayplus.org.uk

We are unable to confirm at this stage if people affected will be able to get a refund, but it certainly looks like the chances of people getting scammed by this method in the future are diminishing.

On other sites using the same business model the software BitComet, BitSpirit, Frostwire and Kceasy feature, but unfortunately this scheme doesn’t stop at P2P clients. Messenger Plus! Live, WinAce, WinZip, 7Zip, DirectX, CDex, and Adobe Acrobat have all appeared with similar installers.