When Comcast introduced the Sandvine traffic shaping solution, it hoped it could quietly interfere with its customer’s BitTorrent activities without getting too much attention. Unfortunately for them, their actions didn’t go unnoticed, and during August last year we broke the news that this ISP does indeed mess with it’s customers internet connections.

Since then, things have gone from bad to worse for Comcast, as their customers started to realize that this ISP wasn’t giving them what they paid for. As a result, Comcast are now being sued and annoyed users formed a coalition to challenge the company to try to claim compensation. All of this is on top of a FCC hearing which deemed that Comcast uses ‘hacker-techniques’ to interrupt BitTorrent traffic, techniques which are employed via the traffic management ‘solution’ from Sandvine. Essentially, the Sandvine system allows Comcast to inject forged reset packets into BitTorrent transfers which makes seeding impossible – good news for ISPs who don’t want to give their customers the bandwidth they paid for, but bad news for BitTorrent, and even worse news for supporters of Internet neutrality.

However, it is the very fact that Sandvine allows ISPs like Comcast to disrupt their customer’s activities which prompted the recent Federal Communications Commission hearings. The FCC warned Comcast that it will not allow it to disrupt internet traffic, which is of course a major concern for other ISPs considering investing in the Sandvine system. According to a G&M report, it is this hesitancy over net neutrality issues, coupled with problems major telecoms companies are experiencing when trying to refinance their debts, that have hit Sandvine hard. A survey by financial services outfit Canaccord Adams suggest that the top 40 global communications companies are all currently extremely wary over capital expenditure. 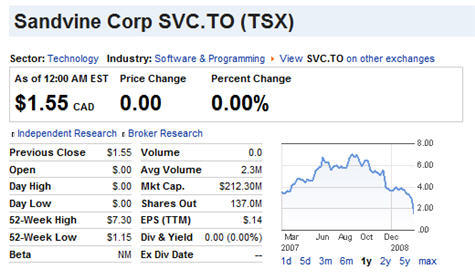 After achieving astronomical growth of 42,000% in just 5 years, Sandvine is really feeling the pressure as on the Toronto Stock Exchange its stock fell a massive 42%, to a low of $1.55. The company already predicted lower performance and revised its revenue estimates back in December 2007. Unfortunately these predictions were still too optimistic as the company has announced that the actual revenue this year is likely to be a further 20% lower than the revised figures. Sales for the first quarter will be $8.2m, an 88% drop on the previous year while full year revenue is expected to be around $80m, down from the December 2007 prediction of $110m.

At best, that means annual growth of just 15 per cent, compared with 132 per cent a year earlier.

Dave Caputo, Sandvine’s President and Chief Executive Officer said in a statement: “We believe that the delays have come about for a variety of reasons, ranging from unique customer-specific circumstances to economic conditions, making operators pause before executing on their approved budgets. We can’t dictate when customers make their decisions, just influence whether they choose Sandvine – and we remain as confident as ever in our ability to do that.”