Ok, so you’ve been caught downloading the latest hits from the Internet without placing money in the pockets of the record labels first, and – according to them – you need to be punished.

In a nightmare scenario you could follow in the footsteps of Jammie Thomas by getting dragged through the courts for years and ending up with a fine of $9,250 per song, but you probably don’t fancy that.

A much more friendly option lies in the “six-strikes” mechanism just around the corner in the US. This involves getting caught sharing files half a dozen times, being slapped on the wrist for just as many, only to face as-yet uncertain consequences including Internet throttling and temporary disconnections.

However, despite the huge effort by rightsholders to get “six strikes” passed, it’s now become apparent that at least one major music company isn’t limiting itself to the education-focused framework that the scheme aims to offer.

BMG Rights Management, home to artists such as David Bowie, Foo Fighters, Kings of Leon, Kylie Minogue, Will.i.am and the Sex Pistols, are now trying to generate revenue from possibly the tackiest “pay-up-or-else” scheme around today.

This is how it works. When ISPs in the United States receive infringement notices from rightsholders they are obliged by law to forward them to their customers. While many customers panic when they receive one, they are really quite benign. They basically tell an alleged file-sharer that they’ve been caught sharing a song or movie and they should stop immediately.

Usually that’s as far as it goes, but BMG are taking things a step further.

In order to communicate directly with an alleged infringer without even knowing who they are, BMG manipulate the obligation of the ISP to forward DMCA notices to their customers by adding additional “evidence”. In this section BMG provide hyperlinks to pages that allow alleged infringers to obtain “legal release from the copyright holder.” 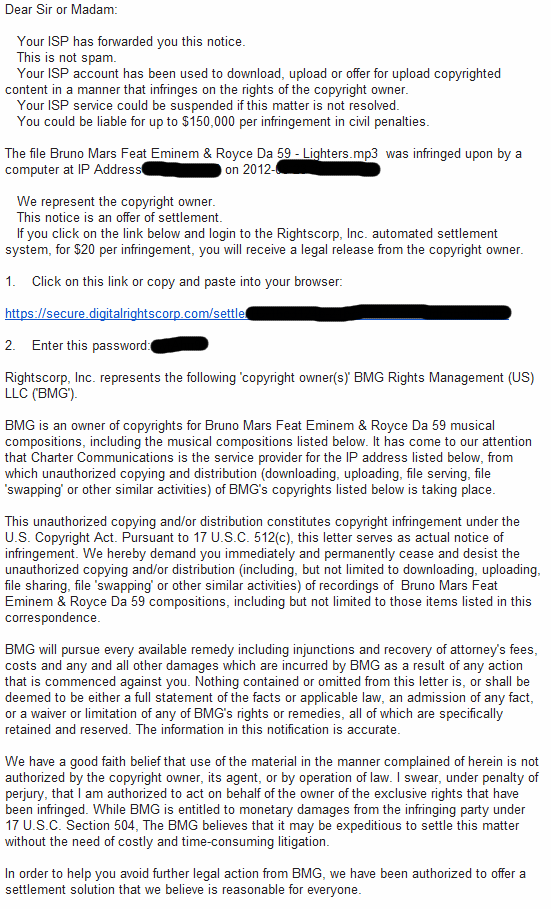 Once clicked, account holders are transported to a settlement site operated by Digital Rights Corp where they are presented with details of the alleged infringement.

Internet account holders are then invited to pay the princely sum of $20 which “finally, unconditionally, irrevocably and absolutely releases, acquits, remises and forever discharges” them from future legal action on the infringement in question.

TorrentFreak discussed this BMG project with lawyer Samuel Perkins of the Brody Hardoon Perkins & Kesten lawfirm. Perkins pointed us to the FAQ page on the settlement site where it states that even when an Internet account holder is innocent, he must take responsibility for the actions of others.

“BMG acknowledges that in many cases the subscriber will not be involved in any unlawful downloading, and will not even have any knowledge of it. I represent many such innocent subscribers,” Perkins begins.

“Under current US copyright laws, they would not be liable for copyright violations that occurred using their Internet subscription. BMG misrepresents subscribers’ copyright liability by stating that ‘most Internet service provider contracts state that the contract holder is responsible for actions taken on the Internet service.’ This statement is designed to convince subscribers that they are liable for a copyright violation if a neighbor or a family member secretly downloads copyrighted material,” Perkins explains.

“By deliberately obscuring the distinction between the subscriber’s contract with the ISP and the subscriber’s liability under federal copyright law, BMG’s website attempts to trick innocent subscribers into settling copyright infringement cases when they in fact have no liability,” he concludes.

As previously reported, Digital Rights Corp are known to represent obscure and dead artists, but BMG have some big names on the books.

As can be seen from the screenshot above, the track in question is Lighters, a collaboration between Royce da 5’9″, Eminem, and R&B singer Bruno Mars. While BMG represents Mars, the track itself is on Interscope, an RIAA-affiliated label.

The music business and its maze of licensing is notoriously complex, but it seems very strange that a member label of the RIAA would allow itself to become associated with this kind of scheme while simultaneously pursuing the “six strikes” model.

The ISP that sent the notice shown above is Charter Communications, which incidentally is not participating in the strikes scheme. It will be interesting to see if more of these notices are sent in the weeks and months to come in parallel with the scheme, or whether this is an isolated project by BMG.

In the meantime these notices might bring in a few dollars but for reasons outlined in our earlier article, whether subscribers choose to pay is essentially up to them – it is unlikely that there will be consequences for simply ignoring them.