With e-readers becoming more popular year after year, book piracy is seen as a growing problem for the publishing industry.

To deal with this threat the French Publishers Association (SNE) announced several countermeasures this week. One of their key initiatives is ProtectionLivres.com, a new anti-piracy portal that will allow publishers to search for infringing content and send infringement notices to take unauthorized copies offline.

“SNE members will soon be able to use a French version of a service developed by English publishers. This portal provides access to a search engine through which publishers can find illegal content and send takedown requests,” they wrote in a press release.

The association explains that the new service will be especially useful to smaller publishing houses who don’t already have systems in place to protect their content. The French version is a copy of CopyrightInfringementPortal.com and will be launched on the ProtectionLivres.com domain in the weeks to come.

At least, that was the plan.

Unfortunately for the publishers, news of the new anti-piracy portal didn’t go unnoticed by the popular eBook release group “Team AlexandriZ.” These book pirates quickly found out that the domain mentioned in the press release wasn’t registered yet. So, Team AlexandriZ decided to buy it instead, redirecting it to the Defective By Design anti-DRM site. 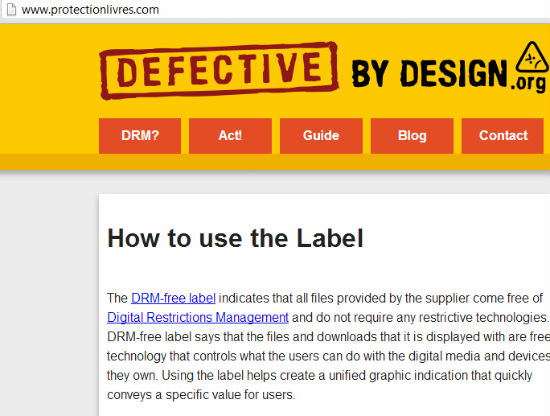 Team AlexandriZ, who were sued by SNE and six book publishers last year, told TorrentFreak that they wanted to reverse the original message the domain was intended for.

“Protectionlivres.com was supposed to be a site where publishers can report pirated content, but it’s now a portal to fight against DRM. Because DRM is one of the causes of piracy, not its effect,” Team AlexandriZ says.

Thus far the plan has been quite successful. French press picked up the stunt, directing the attention for the anti-piracy initiative to the unfortunate mistake. The French Publishers Association quickly realized that they had no other option than to register a new domain name to host their portal.

The above shows that similar to their natural adversaries, anti-piracy campaigns are like a hydra. They simply grow a new head and reappear under a new name. But not without having a laugh first.